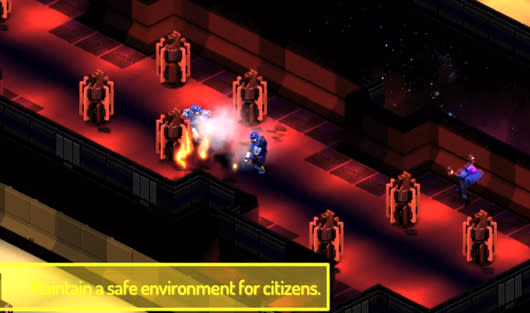 Double Fine launched its sci-fi management sim, Spacebase DF-9, on Steam Early Access today. The game, compatible with PC, Mac and Linux, is available for $25, or $30 with the soundtrack.

In Spacebase DF-9, players construct a space station and nurture its growth. Spacebase DF-9 is played from a three-quarters top-down perspective and challenges players with finding and collecting resources, dispatching enemy invaders, keeping citizens happy and providing for them, and handling any malfunctions that may pop up.

As with other Early Access games, buying into this Alpha version of Spacebase DF-9 contributes to its continued development. Double Fine has opened up an area on the official game's website, as well as the requisite Steam community section, where players can leave feedback.

Head past the break for a Double Fine tutorial video that provides some tips for new players as well as an overview of the mechanics.

Funded by an all-star group of benefactors, Spacebase DF-9 is now available on Steam Early Access and spacebasedf9.com

San Francisco, CA-October 15, 2013-Double Fine today announced and released an alpha build of Spacebase DF-9, a new builder and social simulation. The game will continue to undergo ongoing development in the form of free updates for players, whose feedback will be taken into account.

In Spacebase DF-9, players help humanity and alien allies recolonize the Milky Way following the collapse of galactic society. In an open-ended gameplay environment, players construct and maintain a self-sustaining deep space habitat, deal with environmental and alien threats, and watch and influence the lives of a diverse crew as they live, work, and attempt to stave off space madness.
"I've been really excited about Spacebase DF-9 ever since it was one of the highest-voted games in our public Amnesia Fortnight game jam last year," said Double Fine president and CEO Tim Schafer. "So excited, in fact, that I decided to launch the team into space until they get it finished, free of the tempting pleasures and distractions of the planet Earth."

"But Tim, the team is going to keep working on this game post-release," said Ron Carmel, president of Indie Fund, one of the game's principal financiers. "If everything goes well, it could be in development for a very long time."

"Exactly!" declared Schafer, who has kind of a weird glint in his eye. "And everyone will be able to watch! It worked great during Amnesia Fortnight, after all."

In addition to Indie Fund, Spacebase DF-9 is being supported by a consortium of independent game studios and luminaries, including Humble Bundle, Hemisphere Games, make all LLC, AppAbove Games, Adam Saltsman, The Behemoth, Morgan Webb, and Rob Reid.

"The internet connection we have up here is surprisingly great," said Spacebase DF-9 project lead JP LeBreton. "The people of Earth will be able to play the game as it takes shape, give feedback, and tune in for regular progress updates. This line of open communication will also be helpful in case of emergency. Because, seeing as we're in deep space and are not trained astronauts, I actually expect there to be a lot of emergencies."
Spacebase DF-9 was conceived as a prototype project during Amnesia Fortnight 2012, the first public iteration of Double Fine's annual internal game jam. After being greenlit for full production, it was overhauled from the ground up.

Spacebase DF-9 now features an isometric perspective and newly-developed lighting system, as well as a wealth of other visual improvements. Citizens engage in a rich array of interactions, forming long-term bonds and animosities. A host of new threats faces the player and crew, including pirate invaders, environmental disasters, and unsettling alien creatures. Oxygen and vacuum are modeled in and outside the base, and citizens must contend with airlocks and execute spacewalks to construct new base segments.

Spacebase DF-9 is available for Windows, Mac, and Linux through Steam Early Access and spacebasedf9.com.

Double Fine Productions is a San Francisco-based game developer that makes games with a focus on creativity, characters, and fun. Since its founding in 2000, it has produced the award-winning titles Psychonauts, Brütal Legend, Costume Quest, Stacking, Iron Brigade, Sesame Street: Once Upon a Monster, Kinect Party, Middle Manager of Justice, Dropchord, and The Cave. Learn more about Double Fine at www.doublefine.com.
In this article: double-fine, early-access, mac, pc, spacebase-df-9, steam, steam-early-access
All products recommended by Engadget are selected by our editorial team, independent of our parent company. Some of our stories include affiliate links. If you buy something through one of these links, we may earn an affiliate commission.