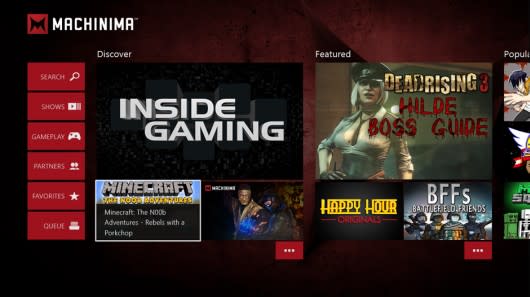 By using the Xbox One's "snap" functionality, players will be able to pin the Machinima app atop gameplay, giving access to game-specific help and other site content. An in-depth feature dubbed "Machinima Wingman" will provide additional tutorials and strategy videos for select games.

Machinima announced a similar product for SmartGlass devices, which will offer the same features as its Xbox One console app. Machinima's Xbox One app will launch on November 22.
In this article: machinima, microsoft, xbox-one
All products recommended by Engadget are selected by our editorial team, independent of our parent company. Some of our stories include affiliate links. If you buy something through one of these links, we may earn an affiliate commission.