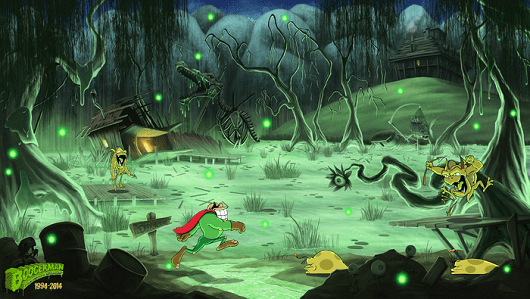 Interplay-developed Boogerman will reach its 20th anniversary next year, and to celebrate, its original creators are looking to develop a new game, funded by Kickstarter.

Like the original Sega Genesis, Mega Drive and SNES game, Boogerman 20th Anniversary will have players guiding Snotty Ragsdale through nasty platforming levels like pus palace, the naval caverns and the mucus mountains. Developers Mike Stragey and Chris Tremmel, who have since worked at a number of studios such as Activision, EA and WayForward, say the game will be a brand new HD experience with new mechanics and levels like swimming and minecart-riding. Perfect Dark, Banjo Kazooie and Donkey Kong Country 64 composer Grant Kirkhope will create the game's soundtrack as well.

Boogerman 20th Anniversary is estimated to arrive in November 2014 for PC, Mac, PS4, Vita and Wii U. The developer is looking to raise $375,000 by November 20 in order to bring the project to life, and has a Greenlight page set up to gain community approval for release on Steam.
In this article: boogerman, boogerman-20th-anniversary, chris-tremmel, crowdfunding, kickstarter, mac, mike-stragey, nintendo, pc, Platformer, playstation, playstation-vita, ps4, toy-ghost, vita, wii-u
All products recommended by Engadget are selected by our editorial team, independent of our parent company. Some of our stories include affiliate links. If you buy something through one of these links, we may earn an affiliate commission.