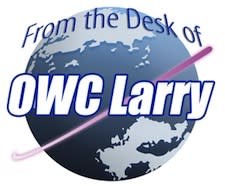 Other World Computing has been creating products for Apple users since 1988, so the company has been a witness to the remarkable turnaround by Apple since that time. In a post on the OWC blog yesterday, CEO Larry O'Connor took Apple to task for the slow pace of Mac hardware evolution and product intros, as well as the closed design philosophy that Apple has been displaying with most of the Mac lineup.

O'Connor states that it's been more than 14 months since the current MacBook Pros were introduced, a year since the Mac mini design was updated and that, although we know about the Mac Pro, we still don't have an idea of the pricing of the top-end model. He notes that Apple was the first major computer manufacturer to support USB and moved quickly to adopt USB 2.0, but delayed the addition of USB 3.0 -- possibly in an attempt to stir up support an interest in Thunderbolt. O'Connor says, "I'm certainly not suggesting Apple doesn't lead and innovate, but it also can be selective and not to the user's benefit on the when and how."

O'Connor's major beef, though, is that the new Macs lock users into what they get from the factory and have much more limited serviceability during their lifetime. Part of this complaint is obviously self-serving; most of OWC's revenues are derived from sales of aftermarket memory and storage upgrades. But he's got a point, since it's no longer possible for most of the Mac lineup to be upgraded, giving many users no option but to purchase a new Mac every few years instead of squeezing some additional life out of the old box with some RAM and a new SSD. Speaking of SSDs, O'Connor also expresses concern that Apple might ditch all traditional internal hard disk drives, creating "a serious burden for people that need to haul around a lot of data."

The blog post is an interesting read from someone who has watched the Mac lineup go from near-extinction in the late '90s to being the only vibrant part of the personal computer market. We'll see for sure if Apple closes the door to user expandability of Macs even further if new products are announced at next Tuesday's event.

In this article: expandability, larry oconnor, LarryOconnor, Mac, opinion, other world computing, OtherWorldComputing, SSD
All products recommended by Engadget are selected by our editorial team, independent of our parent company. Some of our stories include affiliate links. If you buy something through one of these links, we may earn an affiliate commission.
Share
Tweet
Share