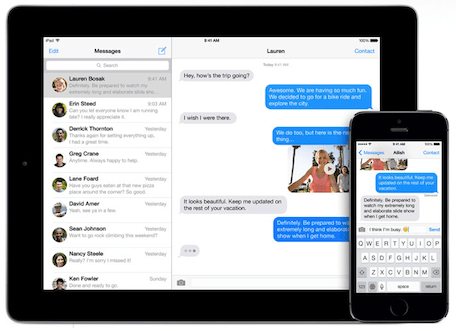 Just yesterday, we reported on the claims of security firm QuarksLab that Apple could read iMessage communications, despite the company's statement to the contrary back in June when the NSA Prism program first came to light. Well, Apple has jumped right on those claims -- with a vengeance.

The QuarksLab research explains how since Apple controls the encryption keys for iMessage, it could theoretically perform a "man-in-the-middle attack" and read or alter the communications between two people, either for nefarious purposes or for the government.

Apple spokesperson Trudy Miller sent a statement to AllThingsD about the research, saying "iMessage is not architected to allow Apple to read messages. The research discussed theoretical vulnerabilities that would require Apple to re-engineer the iMessage system to exploit it, and Apple has no plans or intentions to do so."

AllThingsD's John Paczkowski sums up his story about Apple's declaration with a good comment about the state of surveillance these days, saying "perhaps in today's world iMessage's encryption is only as good as your trust in Apple." With other companies being asked by the NSA to enable methods of intercepting messages, one security researcher told AllThingsD that "it would be naive to think that Apple wasn't at least approached by the government at some point."

In this article: apple, iMessage, man in the middle attack, ManInTheMiddleAttack, NSA, Prism, security
All products recommended by Engadget are selected by our editorial team, independent of our parent company. Some of our stories include affiliate links. If you buy something through one of these links, we may earn an affiliate commission.
Share
Tweet
Share