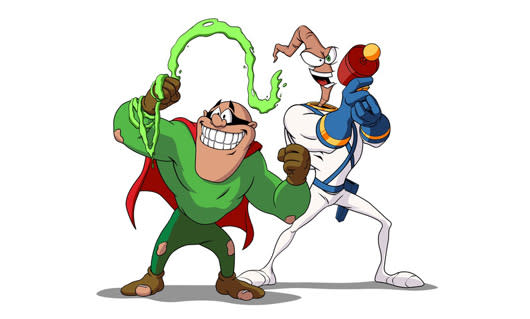 The new mode is available as a backer-exclusive add-on, and is not included as part of the core Boogerman revival itself. The pack adds Earthworm Jim as a playable partner character, along with a batch of exclusive levels designed for co-op play. Backers will also receive a t-shirt emblazoned with EWJ and Boogerman himself.

This crowdfunded team-up marks the first time Boogerman and Earthworm Jim have worked together since 1997's Clayfighter 63 1/3 for the Nintendo 64. Regarding Boogerman's oddly clean-shaven look in the picture above, Toy Ghost notes that the team "forced him to clean up a bit for the picture." Earthworm Jim has standards, after all.

Earthworm Jim creator Doug TenNapel wrapped up his own Kickstarter campaign earlier this year for the Neverhood follow-up game Armikrog. Since its launch last week, the Boogerman 20th Anniversary Kickstarter project has earned over $25,000 toward its funding goal of $375,000.
In this article: boogerman, boogerman-20th-anniversary, earthworm-jim, kickstarter, nintendo, pc, playstation, playstation-vita, ps4, vita, wii-u
All products recommended by Engadget are selected by our editorial team, independent of our parent company. Some of our stories include affiliate links. If you buy something through one of these links, we may earn an affiliate commission.