The Loop Magazine 2.0 improves on the original ... big time 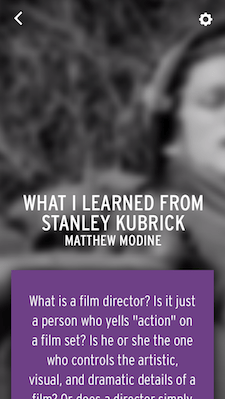 Former Apple employee, guitarist, publisher of The Loop and minion-of-The-Beard Jim Dalrymple has been doing something fun for the past six months -- publishing an electronic magazine known as The Loop Magazine (US$1.99 per issue subscription). It's an eclectic magazine, with article topics running the gamut from dog rescues to the latest iPhones. In the past, The Loop Magazine was published in a quite traditional and staid "pictures and text" format, but with the latest issue, Dalrymple has brought electronic publishing kicking and screaming into the future. Meet The Loop Magazine 2.0.

Once you've downloaded the updated app to Newsstand on your iOS 7 device, the differences are immediately recognizable. Starting with the list of issues, which features a 3D carousel-like presentation of the issues in front of an animated backdrop, you know The Loop Magazine 2.0 is going to be different. The animation continues in the magazine itself, but never overwhelms the content. Individual articles are once again placed on a swipe-able carousel in front of an animated backdrop, and with a tap, the articles open. Inside the articles, you're greeted with text and images, but as you scroll down a page to an image, it expands to fill your screen -- a nice way to actually look at the pictures instead of having to tap them to expand to full-screen. Scrolling down, the images shrink into the text and you're back to reading. Links to websites expanding on the article magically appear and face as you scroll through articles.

Scroll all the way to the bottom of one of the eminently readable articles, and you may see links to the author's website or Twitter account. Scroll past the bottom of an article, and the next article slides into place from the right side of the screen -- once again, that subtle animation is at work.

In case you're wondering about the tool The Loop Magazine 2.0 is published with, it's called Glide. Dalrymple says that it's the easiest tool he's ever used for app creation, saying that it "can create and update Apps simply by putting files in a DropBox folder. It's the easiest system I've ever seen to build a magazine." I won't spoil the fun; go get a copy of The Loop Magazine 2.0, which is free this issue to celebrate the launch of the new platform. You'll enjoy the articles as well as the design of the app -- this issue starts with a piece by actor Matthew Modine talking about his experiences during the filming of Stanley Kubrick's Full Metal Jacket.

In this article: glide, jim dalrymple, JimDalrymple, magazine, the loop magazine 2.0, TheLoopMagazine2.0
All products recommended by Engadget are selected by our editorial team, independent of our parent company. Some of our stories include affiliate links. If you buy something through one of these links, we may earn an affiliate commission.