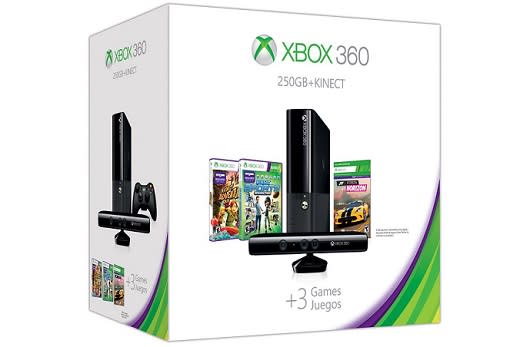 Microsoft's Xbox 360 Kinect Holiday Value Bundle is on sale for $239 as part of today's Gold Box discounts on Amazon. Those that act fast will get the redesigned Xbox 360 E console loaded with a 250 GB hard drive, a controller, a Kinect camera and three games: Kinect Adventures, Kinect Sports: Season 2 and a download code for Forza Horizon.

The bundle normally costs $399, amounting to enough savings to pick up a few extra games, or better yet, groceries so you don't starve this month. Again, the deal is only on for today as long as supplies last, and is a great deal for people that haven't bought an Xbox 360 in the last few days like your humble Joystiq editor has. It's also a good deal for those that aren't picking up a PS4 or Xbox One this coming month.
In this article: amazon, bundle, forza-horizon, gold-box, kinect, kinect-adventures, kinect-sports-season-2, microsoft, sale, xbox, xbox-360-bundle
All products recommended by Engadget are selected by our editorial team, independent of our parent company. Some of our stories include affiliate links. If you buy something through one of these links, we may earn an affiliate commission.