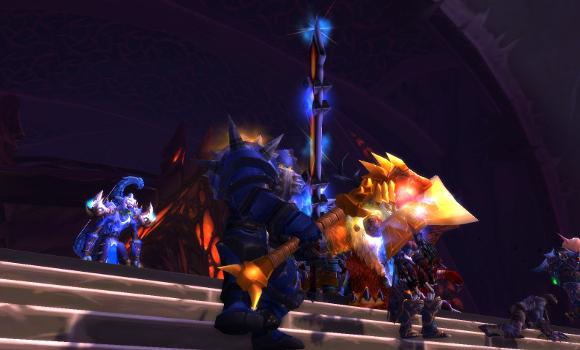 Every so often, a new forum thread comes up saying that LFR is awful and should be removed from the game. This is one, but it's hardly new or unique (as the post closing the thread makes clear, there are already several forum posts on the topic) - the argument has existed in one form or another since LFR debuted at the end of Cataclysm.

It's no secret that I neither like LFR nor run it at all anymore. I am not the audience for LFR. And yet, I not only do not believe it should be removed, I believe it must not be removed. Why do I believe this? Well, multiple reasons.One of the things I argued at the beginning of Mists of Pandaria was that content that wasn't necessarily content I personally cared about (pet battles, the Tillers, scenarios) was still good for the game. Options are good - it's better to have more of them, even if they don't suit everyone's playstyles. In many cases, I've only grown to believe this more strongly as LFR has moved from 'content I occasionally run' to 'content I never run' - my ability to completely disregard LFR as unimportant to my game only means that it proves that the developers have successfully balanced raiding.

I'm not blind to some of the problems that have hit LFR in the process, however. I've watched my wife (an excellent player hampered by the fact that her day job doesn't allow the kind of time we used to spend raiding together) struggle with bad LFR groups, and I do think there have been some changes to LFR that need to be addressed. Gutting the entire feature, however, is absolutely not the way to go. In part, some of the problems for LFR comes from that balancing Blizzard has done. Players who've run normal modes used to still use LFR as a supplemental stop-gap activity, as well as running their alts through it for gear. With the advent of Flex Raiding, people are capable of bypassing LFR entirely, either using Flex for a supplement or taking their alts on the Flex runs, and this means fewer players in LFR with the awareness of how the fights work and how to explain them to the group. Combining this with the general low tolerance I've seen displayed in all groups in World of Warcraft and you can have problems - all it takes for an LFR group to go bad is one player who is vocal and disruptive enough, and the cascade of group dropping takes over. This is exacerbated by the usual suspects - the DPSer who waves his or her numbers around, the tank who drops group as soon as he gets in because she's wanting a specific boss and doesn't want to have to clear up to it, the healer in DPS gear and spec who 'heals' by occasionally throwing off a side heal in-between nuking the boss. These aren't new, either to LFR or the game as a whole, but they can more keenly be felt when some LFR groups now have a smaller pool of players to pull from, increasing queue times and frustration.

I've only done LFR twice this patch - once by myself just to see how it went, and once alongside my wife - and neither of these runs were bad ones. But I've stood in the room and watched my wife deal with other LFR groups, and so I know it can often come down to one or two people who just seem determined to ruin things. In the LFR I did, I had players whisper me with complaints about my DPS - specifically, that it was too high. Yes, that's a thing that can actually happen now. You can be minding your own business, not calling attention to yourself at all, but if you are playing a class that other people expect to see doing poorly it will enrage them to the point where they feel the need to send you tells demanding you do less DPS. But I also received whispers in the exact same LFR from people looking for advice or just being nice to me about helping make the LFR go smoothly. In short, it's not an LFR problem - it's a player problem, and once that's often balanced by other players in the same group.

A lot of the anti-LFR invective I see is aimed at broad stereotypes. It's simply inaccurate - the LFR pool is drawn from the game at large. While Flex may have reduced the overall experience level of the players in LFR, it hasn't suddenly made people deserving of scorn simply because they're there. In fact, many of the problems I see in LFR come from players who clearly look down on the group simply because it is LFR. They don't treat their fellow players with respect or control their actions properly, and it's these disruptions that really make LFR unpleasant when they happen.

Now, there's probably ways Blizzard can tweak LFR to make it a better experience for those running it - a better reporting/kicking system, perhaps, and efforts made to adjust the tuning on LFR for encounters that are challenging even for groups with the kind of communication and coordination that LFR doesn't have. In my experience, it's the lack of communication in LFR that is the real obstacle to success - people who are used to raiding with voice communication are somewhat spoiled in that regard. It would also be nice if Blizzard would make an effort to focus on five man dungeons again, and make them more on-par with LFR in the future - we already have LFR as a separate progression path from Flex and Normal/Heroic raiding, so some effort towards making five mans and challenge modes more a part of endgame in the next expansion could be a nice way to make LFR itself more tolerant. But ripping the feature out by the roots is silly and shortsighted. LFR serves a valuable function - it's raiding at its most accessible. It allows people who simply can't donate three or four hour blocks of time on a regular schedule a chance to see the raid content that is so much a part of the World of Warcraft.

It must not be destroyed.
In this article: flex-raiding, LFR, looking-for-raid, mists-of-pandaria
All products recommended by Engadget are selected by our editorial team, independent of our parent company. Some of our stories include affiliate links. If you buy something through one of these links, we may earn an affiliate commission.