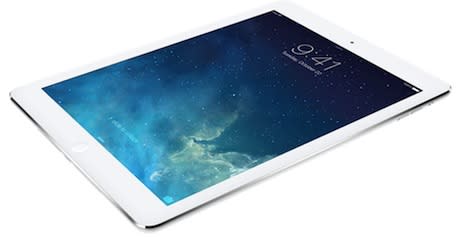 Perhaps it really will be an "iPad Christmas" for Apple this year. Though Apple hasn't yet released any iPad sales figures for the weekend, AT&T this afternoon issued a press release announcing that iPad activations this past weekend were up 200 percent compared to the fourth-gen iPad launch last year.

iPad activations on AT&T increased more than 200% over the past three days compared to last year's launch weekend, driven by consumer excitement around the new iPad Air and the popularity of AT&T Mobile Share, which lets customers add an iPad to their existing data plan for just $10 a month. We also saw strong demand for AT&T Next, which offers customers an iPad for $0 down on the nation's fastest and most reliable 4G LTE network.

While this is ostensibly good news, remember that the iPad fourth-gen launch last year did not include LTE-enabled models. Consequently, it makes sense that AT&T activations during this year's launch would be so much higher than last year's launch.

In this article: activation, ATT, iPad
All products recommended by Engadget are selected by our editorial team, independent of our parent company. Some of our stories include affiliate links. If you buy something through one of these links, we may earn an affiliate commission.
Share
Tweet
Share