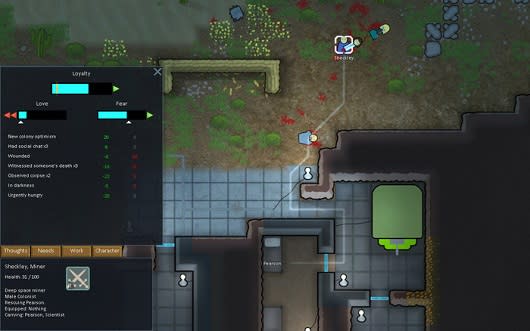 The Crowdfund Bookie crunches data from select successful Kickstarter and Indiegogo campaigns that ended during the week and produces pretty charts for you to look at.
This week in crowdfunding, the Kickstarter projects for RimWorld, Cosmic Star Heroine, Pulsar: Lost Colony, HuniePop, Universum: War Front, Rebuild: Gangs of Deadsville, Spark Rising and Monster Stacker as well as the Indiegogo campaigns for Sword of the Stars: Ground Pounders and Beyond Eyes came to a close.

RimWorld, a top-down, tactical game with an AI "story generator" earned the most money ($257,152) and had the highest number of funders of the week, with 9,498 people funding the project. Flex-funded, sci-fi strategy game Sword of the Stars: Ground Pounders had the highest average pledge per person rate of the group ($75.84).

Check out the week's results and our pretty charts after the break.

Indiegogo:
In this article: beyond-eyes, cosmic-star-heroine, crowdfund-bookie, CrowdFunding, huniepop, IndieGoGo, kickstarter, monster-stacker, pulsar-lost-colony, rebulid-gangs-of-deadsville, rimworld, sales, spark-rising, sword-of-the-stars, sword-of-the-stars-ground-pounders, universum-war-front
All products recommended by Engadget are selected by our editorial team, independent of our parent company. Some of our stories include affiliate links. If you buy something through one of these links, we may earn an affiliate commission.