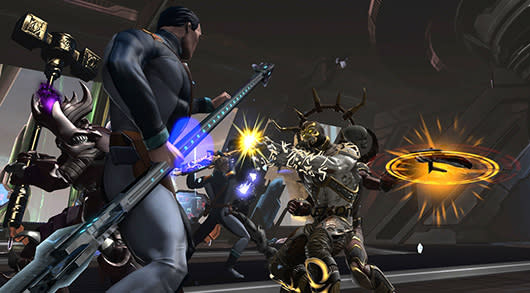 When Sony Online Entertainment launches the PlayStation 4 incarnation of DC Universe Online on November 15, the game will look shiny and new, even if under the hood it's largely the same adventure.

As you'd expect, the PlayStation 4 game will look much better than its predecessor. According to senior creative producer Jens Andersen, the DC Universe Online team has reworked much of the original game's art for the new platform. "We're targeting 1080p at 60 frames per second," stated Andersen.

Most crucially, players on either the PS4 or PS3 side of DC Universe Online will be able to play alongside one another. No new content is being added to the PS4 game that's not already available in its predecessor, so this cross-compatibility shouldn't throw off the game's balance. Further, Andersen mentions a number of tweaks to core game systems that should make the learning curve less daunting while also rendering the game as a whole more intuitive to new players.

You can find more details on what to expect when DC Universe Online hits the PlayStation 4 at Sony's official PlayStation.blog.
In this article: comics, dc-comics, dc-universe-online, playstation, ps3, ps4, sony, Sony-Online-Entertainment
All products recommended by Engadget are selected by our editorial team, independent of our parent company. Some of our stories include affiliate links. If you buy something through one of these links, we may earn an affiliate commission.