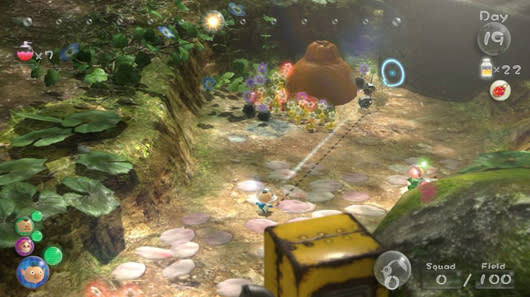 Pikmin 3's parade of premium DLC sallies forth. A new quartet of "Battle Enemies!" stages, which push players to vanquish pre-determined sets of enemies as quickly and efficiently as possible, are up for grabs at $1.99 in the Wii U eShop. The first of these stages is provided free of charge via an automatic update.

The "Battle Enemies!" DLC joins additional "Collect Treasures!" DLC unearthed back in October. The "Battle Enemies!" missions are pulled from locations in Pikmin 3's Story mode and can be played solo or with a friend.
Show full PR text
Nintendo News: Battle Hordes of Enemies in New Action-Packed DLC for Pikmin 3

REDMOND, Wash.--(BUSINESS WIRE)-- Fantastic new challenges in the world of Pikmin 3 are only a download away. Starting today, new challenges in the "Battle Enemies!" mission type in Pikmin 3 can be purchased as downloadable content in the Nintendo eShop on Wii U for only $1.99. One stage is free, and is available via an automatic software update.

The pack of four stages is based on locations from the game's Story Mode and is crawling with tons of hostile creatures. Like all the other stages in Mission Mode, these new challenges can be played solo or cooperatively with a friend. High scores earned in this mode will be displayed on a global rankings leaderboard, encouraging friendly competition with other players all around the world.

To purchase the new downloadable content, Wii U users with broadband Internet access need to select "downloadable content" from the Pikmin 3 page in the Nintendo eShop and follow the instructions to confirm their purchase. Once purchased and downloaded, players can access the new stages from the Mission Mode menu in Pikmin 3 after the game has been restarted.

Pikmin 3 is the latest installment in the fan-favorite Pikmin series. Designed by Shigeru Miyamoto, the game finds three space explorers leading an army of adorable Pikmin on a quest to find supplies for their home planet. The new stages in "Battle Enemies!" mark the second set of downloadable content in Pikmin 3. Additional downloadable content for Mission Mode launched earlier this year in the Nintendo eShop.

For more information about Pikmin 3, visit http://pikmin3.nintendo.com.
In this article: battle-enemies, dlc, nintendo, pikmin-3, wii-u
All products recommended by Engadget are selected by our editorial team, independent of our parent company. Some of our stories include affiliate links. If you buy something through one of these links, we may earn an affiliate commission.