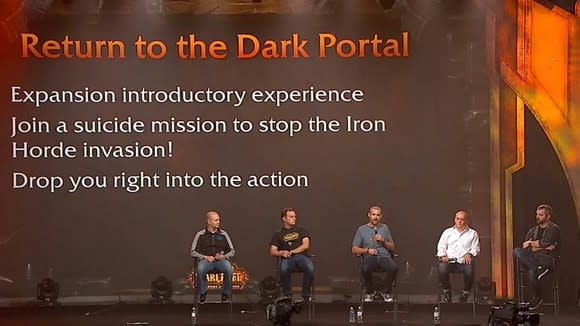 In the World of Warcraft: What's Next panel, Cory Stockton, Lead Content Designer, announced that Warlords of Draenor will have a substantial pre-launch event to introduce players to the story of Warlords of Draenor. Pre-launch events sort of fell by the wayside with Cataclysm and Mists. The last time we had a really involved one was with Wrath of the Lich King's scourge invasion and zombie plague. This event will be a very "guided" experience similar to the death knight class introduction. This will be more than a simple quest.

It will begin in the Blasted Lands when something strange happens with the Dark Portal, causing it to turn red. Players are sent on on a suicide mission through the Dark Portal (yes, before the expansion even launches) to help prepare for the real journey into Draenor when the expansion launches. Those of you who played before BC will remember when the demons started pouring through the portal in the days leading up to launch. It sounds like it will be like that, except we actually get to venture into the portal ahead of time.

I've always missed the pre-launch events and was extremely excited to hear this news. The question is will there be any "gameplay disrupting" events like the zombie plague, or will it be isolated to the events surrounding the portal itself?
In this article: blizzcon-2013, dark-portal, draenor-zones, launch-event, pre-launch-event, warlords-of-draenor
All products recommended by Engadget are selected by our editorial team, independent of our parent company. Some of our stories include affiliate links. If you buy something through one of these links, we may earn an affiliate commission.