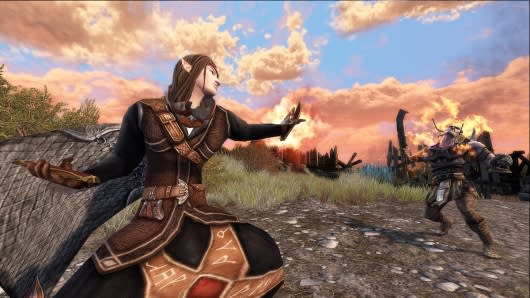 Will Lord of the Rings Online: Helm's Deep break records when it launches next week? Only time will tell, but Community Manager Rick Heaton said that the expansion has already done so in beta.

On the forums Heaton posted, "It's the first expansion that we've had since Shadows of Angmar that required us to add servers to the beta world to match the number of players trying to log in and participate. It was the first beta since Shadows of Angmar that actually tripped our login queues on the beta world and forced us to raise the max player population."

Helm's Deep launches on Monday, November 18th.
In this article: battle-of-helms-deep, beta, beta-records, expansion, f2p, fantasy, free-to-play, helms-deep, lord-of-the-rings, lord-of-the-rings-online, lotro, records, rick-heaton, rohan, shadows-of-angmar, turbine, turbine-entertainment
All products recommended by Engadget are selected by our editorial team, independent of our parent company. Some of our stories include affiliate links. If you buy something through one of these links, we may earn an affiliate commission.