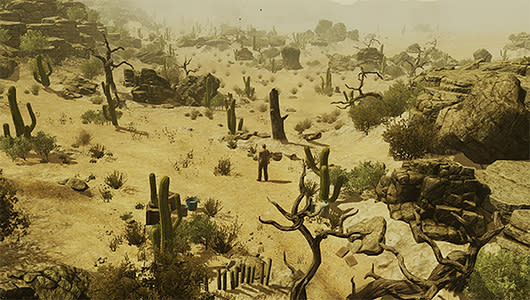 Before Bethesda acquired the rights to the Fallout universe, there was another Fallout 3 in development. We'll almost certainly never see that game completed, but with any luck a new Kickstarter project can take its place.

In development at Black Cloud Studios, After Reset is a post-apocalyptic roleplaying game that, while far from finished, already looks much like the first two Fallout games. Scant gameplay is shown in the footage above, but Black Cloud claims the game will feature a massive global map players are free to explore, so long as they have the water to do so. In their wanderings, players will encounter various tribes, raiders and slave traders - the kind of human detritus you'd expect to find in either a Mad Max film or Fallout game.

From a gameplay perspective, After Reset is said to feature a core story centering on your characters, stories focused on each of the game's playable companions and, most crucially, a non-linear narrative that hinges mainly on player choice. The core rule set is a blend of Fallout's "SPECIAL" system and Dungeons & Dragons 3.5, a design decision that Black Cloud believes will make the game instantly intuitive to anyone who has played the earlier Fallouts, Baldur's Gate or Neverwinter Nights.

Currently, After Reset has raised $18,065 of its $900,000 goal, with 26 days remaining. Assuming After Reset reaches its goal and makes its way to retail, it will be available on PC, Mac and Linux.
In this article: after-reset, baldurs-gate, bethesda, black-cloud-studios, fallout, fallout-3, kickstarter, mac, neverwinter-nights, pc, van-buren
All products recommended by Engadget are selected by our editorial team, independent of our parent company. Some of our stories include affiliate links. If you buy something through one of these links, we may earn an affiliate commission.