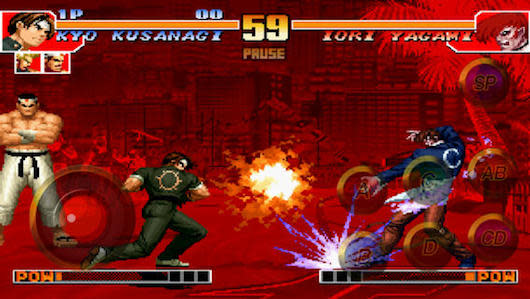 If you're too impatient to see how Legend of Raven turns out under the guide of former King of Fighters developers, King of Fighters '97 can help you relive an iteration of SNK's fighter on iOS and Android devices.

The pre-existing four button layout is still an option, but a new six button sprawl provides an alternative control scheme. The game's listing mentions an "SP button," meant to make pulling off special moves a bit more feasible without the tactile feedback a real fight stick would provide. The port also unlocks characters from the get-go that were originally hidden away in the Neo Geo version.

Considering its 35-character roster and support for Bluetooth multiplayer, $3.99 isn't a bad asking price. Much more affordable than other recent options for replaying Neo Geo classics have been, at least.

Update: Included mention of King of Fighters '97 coming to Android as well.
In this article: android, ios, ipad, iphone, king-of-fighters, mobile, snk, snk-playmore
All products recommended by Engadget are selected by our editorial team, independent of our parent company. Some of our stories include affiliate links. If you buy something through one of these links, we may earn an affiliate commission.