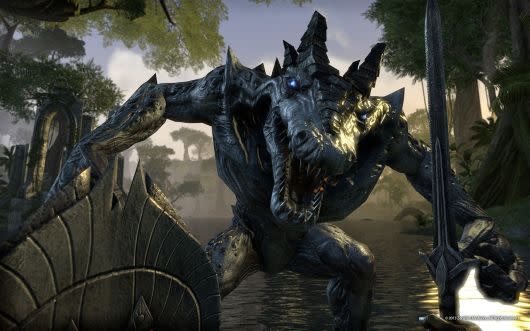 It's time once again for another installment of The Elder Scrolls Online's biweekly Ask Us Anything feature, in which the folks at ZeniMax Online tackle a number of questions from information-hungry fans. This round of questions is a true grab bag, and topics run the gamut from PvP mechanics and lockpicking to character naming and a few lore tidbits to boot.

On the character naming front, many players (especially those fond of Argonians and Khajiit) will be pleased to know that character names will be able to include "a maximum of four hyphens, apostrophes, or spaces in total," so players should have plenty of room for creative and lore-appropriate (or not) names. The devs also clarify that war campaigns will feature a "soft cap to limit the number of participants from one alliance," so no one faction will have the advantage of overwhelming numbers. Other highlights include details on how lockpicking will function in ESO, plus a couple of lore questions that shed some light on the presence (or lack) of characters such as M'aiq the Liar and the vampire Serana. For all the fine details, check out the full post at ESO's official site.
In this article: ask-us-anything, bethesda, bethesda-softworks, bethsoft, daggerfall, dev-blog, dev-blogs, dev-diaries, dev-diary, dev-post, dev-posts, developer-blog, developer-blogs, developer-diaries, developer-diary, developer-post, developer-posts, elder-scrolls, elder-scrolls-online, eso, factions, lockpicking, morrowind, oblivion, pvp, rvr, sandbox, skyrim, tamriel, tes, teso, the-elder-scrolls, the-elder-scrolls-online, three-faction-pvp, three-way-pvp, war-campaign, war-campaigns, zenimax, zenimax-media, zenimax-online, zenimax-online-studios
All products recommended by Engadget are selected by our editorial team, independent of our parent company. Some of our stories include affiliate links. If you buy something through one of these links, we may earn an affiliate commission.