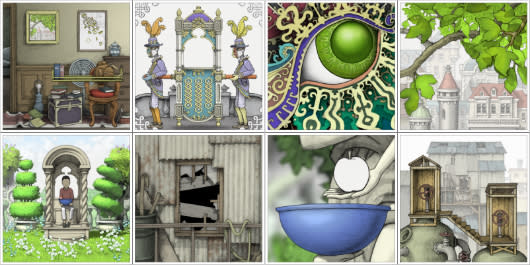 Jason Roberts' Gorogoa was the top pick at the Good Game Club showcase in San Francisco last week, winning a professional-level developer license from Unity. Gorogoa is a meticulously hand-illustrated game where players arrange windows of different vistas – in a grid or on top of each other – to reveal connections and advance the story. There's a demo on Roberts' website. Gorogoa is due out by mid-2014 for PC and Mac, before hitting mobile devices.

"It's not easy encapsulating Gorogoa in a few words, and maybe that's right for a game that doesn't quite exist inside traditional borders," comments Joystiq Editor-in-Chief and Good Game Club Judge Ludwig Kietzmann. "Its gentle hand-drawn art wants you to study it like a painting – but it feels more like gazing through windows, that you can move and rearrange and stack to open new pathways for those beyond and inside the glass. It makes your brain wobble a bit."

Industry luminary and Good Game Club Judge John Davison adds "Gorogoa features some absolutely beautiful illustrations and visual design, but it's the deeply imaginative approach to its puzzles that had me hooked. The way that the panels of the game interact, and draw you deeper into the game is immensely satisfying."

In Gorogoa, players rearrange a few tiles on a simple grid to solve puzzles, placing them next to or on top of one another. But each tile is also a window into a different part of the game world –or perhaps into a different world – and each window plays like its own little game. Even so, the key to progressing never lies within one tile, but in the connections between tiles. Mr. Roberts has posted a demo on his website www.gorogoa.com, and plans to release the game for PC and Mac in the coming months, followed by mobile. Gorogoa also won the IndieCade award for visual design in 2012.

Also at Good Game Club, attendees submitted ballots for their favorite game of the show, and selected Videoball from among the 24 games exhibiting. Videoball is asteroids meets table hockey in a new breed of eSport; focused on fast-paced multiplayer and presented in a sleek package with intuitive controls and – of course – BALLS. Videoball will release for PC and Mac, published by new indie label Midnight City, with additional information posted at http://midnight-city.com/?page_id=93. The Videoball team receives a GeForce graphic card from Good Game Club prize sponsor Nvidia.

Good Game Club is a game showcase open to the public presented through a partnership of Indie Press Day and Plan of Attack, featuring a variety of indie games for all platforms – full line up posted at www.goodgameclub.com. Good Game Club has been established to help new and emerging studios promote and gain greater visibility for their games. Following from the November 13 event at the White Walls Gallery – packed near capacity by local game enthusiasts, press and industry guests – the team is planning for additional events in the coming year. Press attendees at Good Game Club included IGN, Wired, Joystiq, Kotaku, Rock Paper Shotgun, PC World, IndieStatik, Game Critics, Revision 3 and more.

The Good Game Club academic sponsor, The Center for Games and Playable Media at University of California, Santa Cruz, hosted a gallery of student games and attended to answer questions about its games–focused programs, including the undergraduate B.S. in Computer Science: Computer Game Design, PhD in Computer Science with a focus on Game Design, the MFA in Digital Arts and New Media, and the professional Masters in Games and Playable Media. Please see http://games.soe.ucsc.edu/ for additional information on the program.

Twitter @goodgameclub
In this article: good-game-club, gorogoa, Indie, san-francisco
All products recommended by Engadget are selected by our editorial team, independent of our parent company. Some of our stories include affiliate links. If you buy something through one of these links, we may earn an affiliate commission.