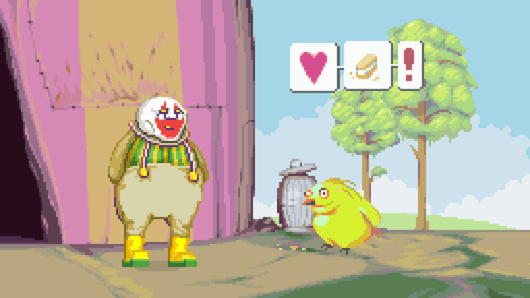 Devolver Digital announced that it will publish crowdfunded indie adventure game Dropsy. The game's Kickstarter project, which successfully surpassed its $14,000 goal, is slated to end on November 24. Designer Jay Tholen explained in an update on the project's page that Devolver Digital will help the developer with marketing, QA and localization of the game, and will top off development funds to ensure it reaches its stretch goals.

In development since 2011, the PC, Mac and Linux game is a point-and-click adventure game in which characters guide a "misunderstood but cheerful" ex-clown named Dropsy through a "surreal, grotesque world." With his dog Eughh at his side, Dropsy journeys through the world to bring happiness to others, offering unwanted hugs to everyone, as he "doesn't recognize anyone as his enemy." Tholen notes in the game's pitch video that it is almost entirely text-free, replacing traditional point-and-click elements with symbols that players need to interpret on their own to reflect Dropsy's inability to speak.

Devolver Digital noted that "any and all funds collected via Kickstarter will of course remain with the developer to fund the development of Dropsy," and that it "is not involved with money from backers nor do we have any say in how it is used." Tholen and his team sought funding on Kickstarter for the game twice before: The developer raised $1,613 in November 2011 before failing to reach its $25,000 goal in July of this year.
In this article: adventure, clown, CrowdFunding, devolver-digital, dropsy, jay-tholen, kickstarter, mac, pc, Point-and-Click, Publishing
All products recommended by Engadget are selected by our editorial team, independent of our parent company. Some of our stories include affiliate links. If you buy something through one of these links, we may earn an affiliate commission.