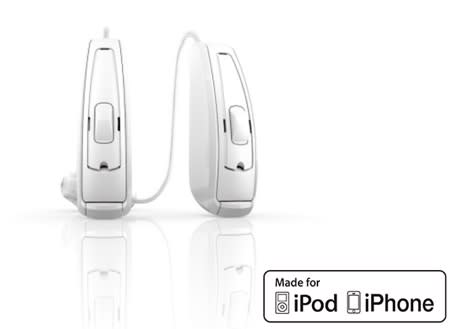 One reason why I love Apple is that the Cupertino company doesn't innovate just for the sake of innovation. It pushes the envelope on technology to make life better. An excellent example is this upcoming iPhone-compatible hearing aid from Denmarks's GN Store Nord.

As reported by Reuters, this new hearing aid is a collaborative effort between Apple and GN, the world's fourth-largest hearing aid maker. Apple reportedly contacted hearing aid manufacturers last year, looking for one willing to use a 2.4GHz frequency to connect a hearing aid directly to an iPhone. GN was already working on this 2.4GHz technology, and the two companies paired up to bring a product to the market.

The ReSound LiNX hearing aid will allow users to send music and other sound from their iPhone or iPod touch to their hearing aid. It's a direct connection, so the user does not have to wear a separate transmitter as an intermediary. Called the "first attempt to turn a hearing aid into more of a lifestyle product" by Morgan Stanley, the LiNX is expected to debut in early 2014.

In this article: hearing aid, iPhone
All products recommended by Engadget are selected by our editorial team, independent of our parent company. Some of our stories include affiliate links. If you buy something through one of these links, we may earn an affiliate commission.
Share
Tweet
Share