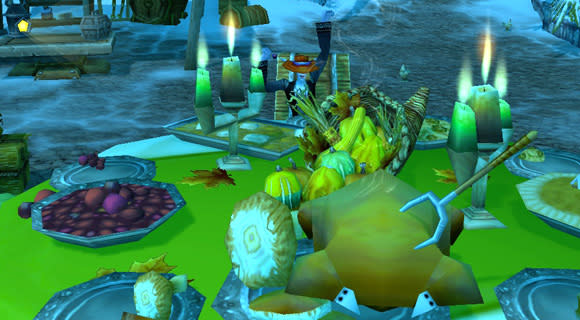 Let's do something crazy, guys: Let's be unabashedly positive. Just this once.

Here in the world of public WoW commentary, we love us our complainin'. Be it on forums, Twitter, videos, podcasts or blogs, we enjoy chewing on the game, swishing it around in our mouths a bit, spitting it back out onto our plate and then lamenting how disgusting it looks.

Now, to be fair, we do so with good reason. If we don't let WoW's designers know what we think is wrong with the game, how else are they gonna find out? (Besides, you know, analyzing mountains of data and talking to players themselves.)

But sometimes -- just every now and then, mind you, we don't have to make it a habit -- it can be just as helpful to talk about what we do like. Not just for the designers, to help them understand what parts of WoW we appreciate and regard as shining examples of the game's successes; but for us as well, to give us a healthier perspective on this e-world we call a virtual home.

In honor of Thanksgiving in the U.S., here are a few of the things that I'm grateful for when I play my World of Warcraft rogue. Join me in the comments (or on Twitter with hashtag #thanksroguing) and let me know what I've missed!

There was a time, not terribly long ago, when moving while stealthed was like wading through molasses for a rogue. Our base speed in stealth was 70% of normal -- the same as feral druids -- up until the first major patch of Cataclysm, when the speed restriction from stealth was removed.

And the cooldown was reduced.

And our non-combat pets began stealthing with us.

And we no longer broke stealth when we sustained fall damage.

With our passive movement speed boosters -- such as Nightstalker and our go-to boot enchant -- and more active turbo powers such as Sprint, this means that when we're in stealth, we usually move faster than we do when we're visible -- in fact, when other characters are riding their mounts back through the outdoor portions of Siege of Orgrimmar after a wipe, I'm often matching them step for step.

Back in early Cataclysm and before, using stealth frequently felt like a punishment. Now it's an almost-unmitigated joy; I'm playing my rogue the way it's meant to be played. And I don't even PvP! I can't imagine what a revelation it was for longtime PvPers when stealth became an uber-efficient way to navigate a map unseen. These Boots Were Made for Burstin'

I love Burst of Speed (BoS). It may be my single favorite rogue change of this expansion. I realize that Shadowstep, another option in that level-60 talent tier, is often far more effective at getting us where we want to be, but the need to wait 20 seconds between uses has always frustrated me (and it frustrated me about 20% more prior to Patch 5.4, when Shadowstep's cooldown was 24 seconds).

Similarly, while Sprint's relatively short duration and relatively long cooldown allowed for better PvP balance and made its use more strategic, it just wasn't enough to be satisfying for a poor ol' roguish chap such as myself, who was just looking to more quickly slip between mobs and through towns while questing and exploring.

BoS has been through some adjustments since its introduction at the start of Mists -- it originally cost four times as much energy as it does now, took us out of stealth when we used it, and broke root effects -- but its current iteration is almost perfect for a casual PvEer such as myself. Because it can be used (and spammed) almost at will, it's wonderful for covering ground out in the world, especially when used in conjunction with stealth as I mentioned above. And it's bonzo for Proving Grounds.

Even in raid environments, while it may not be as immediately effective as Shadowstep for getting me behind and within range of a highly mobile target, it does allow me to feel as though I'm constantly working to close the gap. I'm never standing there helplessly (or running like a snail) waiting for Shadowstep's cooldown to end, and when fire erupts beneath me I can be that much quicker to scoot out of it.

BoS is an ability that makes me feel more active and engaged in the game while I'm playing it, and for that I'm grateful.

Now, if only the Glyph of Blurred Speed also worked on BoS and I could forever glide over water. ... Sigh. Are you listening, Great-father Winter?

Is it fair for a top damage-dealing class to also have a self-heal? Heck yeah it is.

Recuperate is generally regarded as weak enough that it's of negligible value in competitive PvP or PvE. But in more casual aspects of the game -- questing, battlegrounds and so forth -- it has dramatically improved a rogue's quality of life.

I still have vivid memories of my solo experiences while first leveling my rogue -- and then, later on, when I began trying to single-handedly clear dungeons and raids. Before I headed out on an excursion, I'd have to stuff my bags with stacks of food to ensure I wouldn't have to spend 90% of my time twiddling my thumbs as my health slowly ticked back up between combat engagements. Instead, thanks to those five metric tons of nommage, my downtime was more like 40%.

But then? Recuperate rose over the horizon like a glorious sunburst. Downtime while playing solo went away almost entirely, and I was able to spend so much more of my game time actually, you know, playing the game. It was a revelation -- and, particularly when paired with the Glyph of Deadly Momentum, it's grown into a fun new playstyle that hasn't been available to a rogue before: rolling seamlessly from one mob to the next while questing through a zone, dispatching enemies one by one with ... well, roguelike efficiency. The Best Kit in the Biz

I'm fond of saying that I never feel more like a rogue in WoW than when I'm out and about in the world. When I'm questing, exploring or dipping my toes in the periodic battleground, I'm making the most of all the wonderful toys I've been given.

My stealth and my speed -- along with escape mechanisms like Vanish -- let me choose my battles, and to end fights on my own terms without taking a one-way trip to a graveyard.

My wealth of defensive cooldowns -- Cloak of Shadows, Dismantle, Evasion and Feint, among others -- frequently allow me to stay alive even when I've bitten off more than I can chew, and allow me to challenge myself against superior foes in superior numbers.

And though PvP makes me nervous as all get-out, when I dare to dip my toes in, I've often found it downright fun to torture healers by sneaking up behind them, silencing them, and then unleashing a barrage of interrupts, stuns and other crowd-control abilities that likely leave them flinging their keyboards against the wall in frustration. The rogue's stunlock days may be long over, but our ability to drive casters absolutely insane is unrivaled, and we can easily change the course of a battle by sneaking behind enemy lines and keeping their healer occupied.

Rogues are an incredibly versatile lot, and our toolkit -- particularly when it's in the hands of an expert toolsmith -- simply can't be beat in terms of variety. We are devious and slippery, just as we should be, and it's one of the key facets that make me love my rogue.

Shine on You Crazy Stabbers

Alright, that's enough out of me. What's your #thanksroguing message? Surely I overlooked dozens of morsels of roguedom that make our class fun to play -- not only in terms of quality of life, but in terms of class mechanics, balance, competitiveness, culture and any number of other ways. What aspects of playing a rogue do you enjoy most?

Sneak in every Wednesday or two for our RPPM guide and tier 16 set bonus review, a look at the eight key things you should keep in mind when leveling your rogue -- and of course, why we'll always be the bad guys.
In this article: featured, rogue-info, wow-rogue, wow-rogue-info, wow-rogues
All products recommended by Engadget are selected by our editorial team, independent of our parent company. Some of our stories include affiliate links. If you buy something through one of these links, we may earn an affiliate commission.