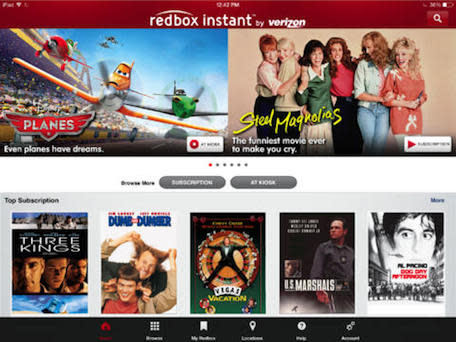 Redbox fans will be happy to know that the company has released a new version of its universal Redbox Instant by Verizon app that supports AirPlay streaming. Redbox is among a long line of iOS apps and services that have embraced AirPlay streaming due to its popularity with users.

There are a few caveats to be aware of. First, as Redbox notes:

"To use AirPlay with our Apple iPhone, iPad and iPod touch apps, your device needs to have version 6 or higher of the iOS operating system. Also, AirPlay will work with streaming content, but not with downloads."

Engadget has pointed out additional issues. The stream will be broken if you get a text message, certain notifications, quit the app or lock your device. All these issues make it a pretty slim chance that you'll get through an entire film without interruption. Hopefully, Redbox will address these issues in the near future.

In this article: airplay, iPad, iPhone, redbox, redbox instant
All products recommended by Engadget are selected by our editorial team, independent of our parent company. Some of our stories include affiliate links. If you buy something through one of these links, we may earn an affiliate commission.
Share
Tweet
Share