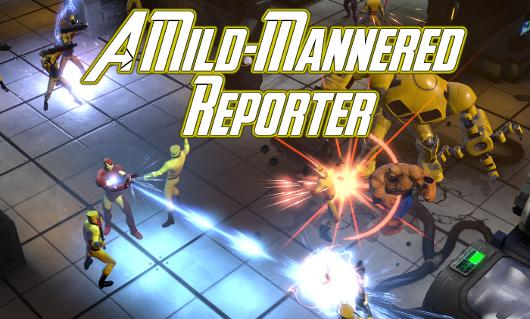 After a couple of very active months, November was a bit calmer for superheroic games as a whole. It makes sense, of course, since pretty much every game is calmer during November and December aside from sales and holiday events. But there were few big Kickstarter campaigns, a lot of updates that everyone knew were coming, and of course a very poignant anniversary for pretty much everyone reading this column today.

That having been said, the entire month was not a slow funeral dirge for the loss of City of Heroes. In fact, one game apparently decided that the otherwise quiet month was a great time to make some big changes right off the bat, so that's pretty cool. Venture on past the cut with me and we'll take a look at the superhero news from November in review... and possibly bow our heads briefly in respect for the departed.

By the time you're reading this, Marvel Heroes will be hitting the six-month mark. To celebrate, the developers apparently decided to go ahead and mark off two major updates within the same month. Yes, I'm saying two because one was delayed slightly, and the net effect of that delayed update involves eating Infinite Crisis' lunch before it's even had a chance to sniff the sandwich.

I'm not saying that Marvel Heroes PvP is a better MOBA than Infinite Crisis, partly because my opinions on the entire genre are worse than useless. I am saying that it's a functional MOBA in a game that offers you a lot of other things to do, which is a bit of an odd mood and a pretty solid case of beating the other game to market. If you want superheroes beating one another up, that's available right now. And then you can go beat up thugs instead because why wouldn't you be able to?

And then there's Asgard. I absolutely love Asgard from the comics; I love how there was an entire realm of myth that was comfortable connected to Earth and how several stories would happily move Thor and various hangers-on back and forth between the two. I absolutely adore the idea that you go from fighting street crime to literally fighting against the enemies of a pantheon without ever breaking stride. While Thor himself never did a whole lot for me, the mythos and the mixture of fighting crime in New York City and fighting evil in Asgard is really fun for me.

Plus, the movies seem to be rather popular at the moment, so that's all the more reason for this to happen now.

Balance issues abound, naturally; Loki was overtuned, then undertuned, and Gambit is apparently not doing so wonderfully. But by and large Marvel Heroes managed to come out swinging this month. Well played, Gazillion.

Oh, well, never mind what I said above. Infinite Crisis is obviously one of the best things ever.

Look, I do not care what else you're going to say. If you build a mecha version of a major hero, that is awesome. I'm also happy to see something other than endless variants of Batman, but seriously, Mecha Wonder Woman. I can entirely see the benefits of a lifetime subscription to Star Trek Online. The trick is working out the break point where you start getting more value for the money, and quite frankly Star Trek Online is a game that's always made that value seem pretty appealing to me. I'm a fan of the franchise, and at the price as I write this ($200), you need only play for 14 months before you start more than breaking even. That's not a bad deal with the amount of content that's added to the game.

Why am I bringing up Cryptic's other game that converted to free-to-play? Because it's in stark contrast to Champions Online. You can say that this was just an attempt to bring the veteran rewards in line for both of the games, since Star Trek Online already has all the veteran rewards offered to lifetime subscribers, but it's hard not to see it as an attempt to get people to drop money on another lifetime subscription.

Except I'm willing to bet that the people who would be convinced by this already have all of the veteran rewards. You can't tell me that there are people out there still eagerly anticipating what crazy new feature Champions Online is going to add next (hint: that feature is "complete developer silence").

This graduates into being almost insulting when you consider that this wasn't accompanied by news of some big upcoming patch or something similar. It just stood on its own: buy a lifetime subscription, get veteran rewards up front. Except that you hardly need a lifetime subscription to the game except so that you don't have to pay for a month every time you want to experiment with a freeform character.

I can't conceive of a scenario in which that lifetime subscription would ever pay for itself. I mostly feel sorry for the people who did buy one back in the day because for all the positives to be said about the game, its long-term viability is not one of them.

Do I need to say again that I'll start getting excited about these games when they show up in some form of playability? I'm cheering for these games, but they're not actually even games yet, just ideas. There are a lot of steps between the idea stage and the game stage, and I can't get psyched about mockups without some sign that things are being developed beyond the concepts.

As always, you can leave your feedback down below or send it off by mail to eliot@massively.com. Next month, it's time for another review, and we should probably look back at the year as a whole at some point, yes?