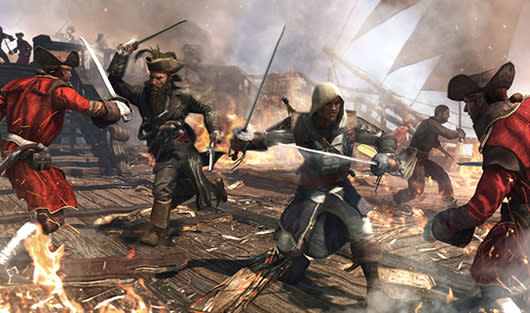 Ubisoft recently sent out a survey to fans about the future of the Assassin's Creed series, IGN reports. The publisher seemingly asked players for thoughts on a hypothetical pirate-themed game similar to Assassin's Creed 4 that would take place outside the series. The survey reportedly asked whether customizable ships, characters and hideouts or a "deeper economy" and "additional activities at sea or on land" were more important to players, and also gauged fan interest in co-op and multiplayer naval battles.

Ubisoft conducted similar questionnaires in the past. Coincidentally, the publisher also specifically asked players about cooperative multiplayer in December 2010 following the release of Assassin's Creed: Brotherhood and again in November 2012 after launching Assassin's Creed 3. Both of those polls were conducted by GMI Surveys, though the origins of the latest one is a little less clear.
In this article: Assassins-Creed, assassins-creed-4-black-flag, microsoft, nintendo, pc, Pirates, playstation, ps3, ps4, questionnaire, survey, Ubisoft, wii-u, xbox, xbox-one
All products recommended by Engadget are selected by our editorial team, independent of our parent company. Some of our stories include affiliate links. If you buy something through one of these links, we may earn an affiliate commission.