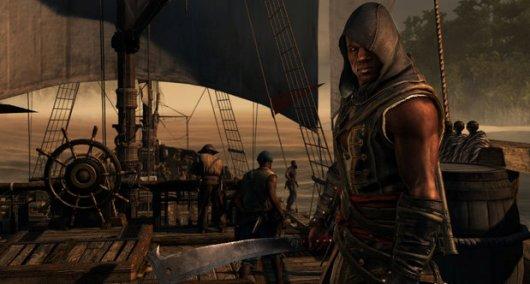 Hark, now hear the Freedom Cry: The Assassin's Creed 4: Black Flag DLC arrives on Xbox One, PS4, PS3, Xbox 360, and PC on December 17. European PlayStation owners have to wait one day longer to smell the DLC's sea and feel its sky on December 18.

The single-player DLC comprises nine missions, in which players take on the role of former slave Adewale. Now first mate to blond buccaneer Edward Kenway, Adewale finds himself washed up in Haiti, or as it was back then, the French-owned colony of Saint-Domingue, a land itself plagued by slavery. Although he begins unarmed and crewless, Adewale finds new weapons in a machete and blunderbuss gun, as well as a personal reason to fight.

"We're still true to how his character was established in Black Flag," said AC4 Lead Writer Jill Murray on Ubisoft's blog. "He's not standing in for every black man who was ever a slave in the 18th century. He's Adéwale. He's the character we know. He has the wit that we've come to expect; he has heart. We see him as an older guy. He's matured and changed in some small ways. I think those are the kinds of character details that always take precedence over pretty much everything else that can happen in the story."

Freedom Cry is a nine mission self-contained story featuring Edward Kenway's first mate Adewale. Born a slave, Adewale found freedom as a pirate aboard the Jackdaw as captain Edward Kenway's second-in-command. Fifteen years later, Adewale has become a trained assassin and finds himself shipwrecked in Saint-Domingue with no weapons or crew, starting a new adventure of his own.

For players interested in the Assassin's Creed IV: Black Flag™ Season Pass, it's available now and includes Freedom Cry, as well as the exclusive Kraken Ship Pack, additional single-player missions, weapons, skins and collectibles, including the Blackbeard's Wrath add-on content as well as upcoming new characters for an expansive multiplayer experience.
In this article: assassins-creed-4-black-flag, freedom-cry, microsoft, pc, playstation, ps3, ps4, release-date, ubisoft, ubisoft-montreal, xbox, xbox-one
All products recommended by Engadget are selected by our editorial team, independent of our parent company. Some of our stories include affiliate links. If you buy something through one of these links, we may earn an affiliate commission.