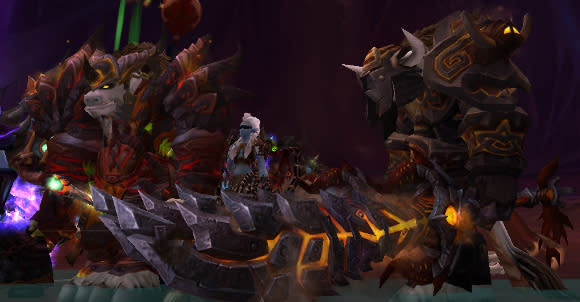 I know that a lot of WoW players don't care about lore or role playing, and I've always kind of felt that was a shame. Some of the most fun I've had in World of Warcraft was in playing a role (and no, I don't mean tanking) -- I've talked before about the old days when I actually led a Naxx raid in character as an overly concerned tauren worried about all the small people. Nothing irritates an orc warlock as much as hugs, let me tell you.

I mention this because, thanks to a coworker's twitter, I discovered Daily Character Development, and it got me thinking about my character. Quite frankly, as silly as it might be to concern myself with the fictional life experiences of a mass of pixels, I also find it brings an extra something to the game. Raids come and go. Gear gets replaced. But I find that even dedicating a little time to who you're raiding on, and who that gear is going to, makes it a little bit more fun for me.

Of course, I'm coming at this from the perspective of someone who's played tabletop pen and paper RPG's for years and years. But as just one example, when I was playing an orc, I sat back and thought about how that orc would view Garrosh Hellscream and realized that from the perspective of a young orc who's basically grown up on Azeroth, Hellscream was basically the perfect orc. That at least some orcs could totally get behind his agenda. It made the whole Horde civil war aspect of the thing incredibly interesting to me, after I rerolled Alliance again I imagined my orc ended up on the wrong side... and probably dead at the hands of the combined forces besieging the city. It doesn't have to be that serious or significant, of course. My orc shaman is, in my imagination, so totally committed to the elements and their balance that she just kind of misses things. She's not scatterbrained or absent minded, but it can appear that way, because all she really wants to spend her time on is fixing her people's relationship with the elements and ancestor spirits that was so badly damaged by Gul'dan and his actions. She stayed in Outland because I stopped playing her at level 70, but in the story I've come up with for her, after Illidan was defeated she wanted to stay and try and heal her people's home as much as was possible. She got a good retirement.

This doesn't mean I don't enjoy collecting loot, although it does play into my transmog fetish - my main, for instance, has specific plate sets I've collected because they match my conception of him as an extremely old, grizzled, scar-seamed, taciturn draenei who has been through untold thousands upon thousands of years of conflict - the two feed into each other. I don't collect many transmog sets or items that don't work with this theme - I have one set of glowing crystalline armor that I justify as being ceremonial garb he rarely ever wears - and wearing specific sets really works hand in hand with setting the tone for how I play him. Perhaps this relates to why I enjoy the game still, after all these years. I've built up tiny biographies, narratives for these people that I pretend to be from time to time.

There's of course a lot more to World of Warcraft than this - there's a lot of content to go through in game nowadays. There are days I log on, blow through some dungeons, go to my raid and never once contemplate how my character would feel or think about it. I don't think this kind of thing is, or even should be, mandatory to enjoying the game. If anything, I think there are so many ways to enjoy your time playing that if you never once touch upon it, that's absolutely right and proper so long as you are enjoying it. I merely hold it out as something that has brought me an unexpected amount of fun over the years - even just running a friend's lowbie through Deadmines while RP'ing my old human warrior as the kind of old guy who just can't stop comparing everything to the way it was when he was a kid ("In my day we didn't have giant robot scarecrows that attacked you, we were just attacked by giant crows!") made an otherwise tedious 1000th run through the place fun again.
In this article: Role-Playing, RP, Who-Are-You
All products recommended by Engadget are selected by our editorial team, independent of our parent company. Some of our stories include affiliate links. If you buy something through one of these links, we may earn an affiliate commission.