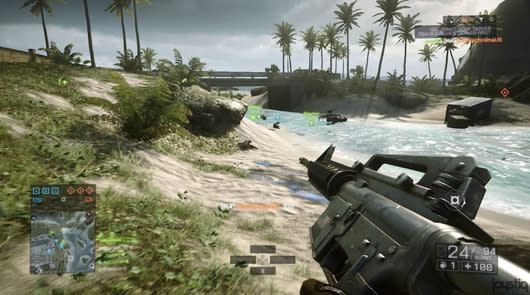 A new update for the PC version of Battlefield 4 is currently available for download.

Arguably the biggest improvement is the elimination of "kill trading." Before, when two players both seemingly fired at each other at the same time, both would drop dead in unison. EA has now adjusted the netcode to account for this, so there should be far less "kill trading" in multiplayer matches.

The update also addresses some bugs having to do with vehicle turrets dishing out too much damage when a certain specialization was equipped and another issue where players in Defuse matches would mysteriously get kicked out of the match and into Spectator mode. EA also squashed a few problems involving Nvidia drivers.

Also of note: If you've got SLI enabled on your graphics card, this update may cause flickering and for some graphical overlays to get stuck on-screen. EA is aware of the issues and hopes to resolve them in another future update.
In this article: battlefield-4, dice, ea, kill-trading, netcode, origin, patch, pc, update
All products recommended by Engadget are selected by our editorial team, independent of our parent company. Some of our stories include affiliate links. If you buy something through one of these links, we may earn an affiliate commission.