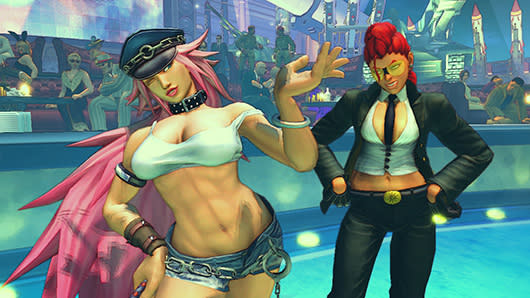 When Rolento, Elena, Hugo and Poison headline the Ultra Street Fighter 4 cast, they'll be joined by a fifth, mystery combatant. We know nothing about this character, though thanks to producer Yoshinori Ono, we can at least now confirm her gender.

During the recent Capcom Cup fighting game tournament, Ono fielded questions about the new combatants, quickly denying awesome possibilities like bosomy luchador R. Mika and Mike "Mayor of Earth" Haggar. Also posited was the idea that Retsu, the deadly assassin from the original Street Fighter make might a return - canonically the bald guy is pretty crucial to the Street Fighter storyline, despite missing nearly two decades of games - but all of these ideas were categorically denied by Ono.

Instead the mischievious producer offers one single iota of information: The newest fighter will be of the distaff persuasion. This could be a new fighter, or it could be an old favorite - the series' roster has plenty of room for either - but it looks like we won't know more until Capcom decides to unofficially unveil its latest female pugilist.
In this article: capcom, microsoft, playstation, ps3, street-fighter, ultra-street-fighter-4, xbox, yoshinori-ono
All products recommended by Engadget are selected by our editorial team, independent of our parent company. Some of our stories include affiliate links. If you buy something through one of these links, we may earn an affiliate commission.