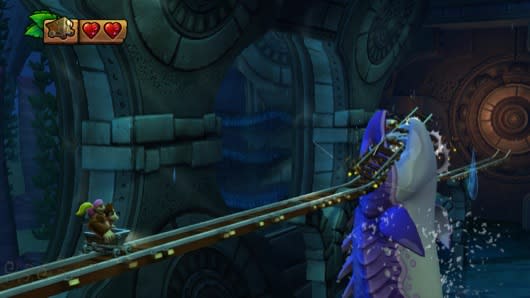 Nintendo showed off a new trailer for Donkey Kong Country: Tropical Freeze during its Nintendo Direct presentation today. The video briefly spotlights the Wii U game's fourth playable character, Cranky Kong, who was first announced for the game during the VGX awards earlier this month.

Donkey Kong Country: Tropical Freeze was previously scheduled to launch this month, but was delayed to February 21 back in October. Our time with the game at E3 this year playing cooperative multiplayer was largely positive, and at some points "seemed really difficult, even by Donkey Kong standards."
In this article: cranky-kong, donkey-kong, donkey-kong-country-tropical-freeze, gameplay-video, nintendo, nintendo-direct, retro-studios, trailer, wii-u, xmas-direct-2013
All products recommended by Engadget are selected by our editorial team, independent of our parent company. Some of our stories include affiliate links. If you buy something through one of these links, we may earn an affiliate commission.