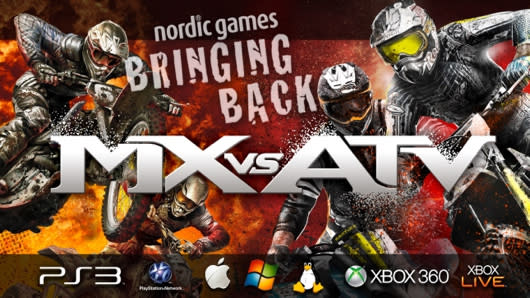 The MX vs. ATV franchise, purchased by Nordic Games during the THQ intellectual property auction, is revving up again. The Austrian-based publisher revealed MX vs. ATV Supercross today, which is due to release in the first half of 2014 for PlayStation 3, Xbox 360, PC, Mac and Linux as a digitally distributed product.

"A lot of the original team members have been aching to continue their passion: building the most authentic off-road racing games possible. The hiatus is over, and the team is back to work on MX vs. ATV with great new things to come," said Executive Producer Ken George.

Business development director at Nordic Games Reinhard Pollice added, "We're absolutely committed to ensuring Ken and his team receive the best support and the freedom to create the games they love making – and we're confident that the series will continue to grow from strength to strength. Supercross is just the start of our MX vs. ATV plans."

We got a better sense of Nordic's mindset after its $4.9 million acquisition of THQ properties, with the company laying out its plans for us at Gamescom. MX vs. ATV was high on the resurfacing docket at that time, with Titan Quest also planned to return in the near future.
In this article: mac, microsoft, mx-vs-atv, mx-vs-atv-supercross, nordic-games, pc, playstation, ps3, xbox
All products recommended by Engadget are selected by our editorial team, independent of our parent company. Some of our stories include affiliate links. If you buy something through one of these links, we may earn an affiliate commission.