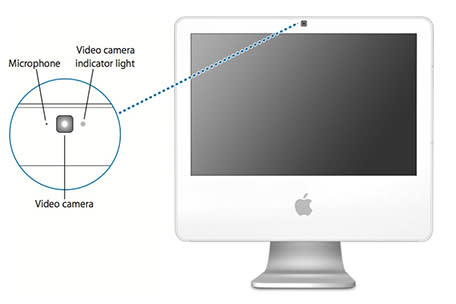 A few years ago, while on Skype, I asked a friend why his camera was dark. He replied that he had put tape over the camera light so that no one could spy on him. I wrote it off to paranoid silliness and told him that wasn't possible.

Well, turns out I was wrong. Jeff Gamet at The MacObserver tells us in a piece titled Researchers Hacked into MacBook Camera, but that Doesn't Mean They're Spying on You that two researchers have found a way to disable that little green light, which lets you know that your camera is on. Don't despair though; this only works on older Macs. Plus, it requires a firmware hack.

Matthew Brocker and Stephen Checkoway from Johns Hopkins University recently published a technical paper, ıSeeYou: Disabling the MacBook Webcam Indicator LED. The paper details their tests in disabling an iSight camera's green LED light in some versions of MacBooks, iMacs and the iMac G5 circa 2008 and before. The 13-page paper gives you all the details on the internal iSight architecture, modifying the various Mac's firmware and defending the iSight against attacks.

Our results in this paper demonstrate that, at least in some cases, people have been correct to worry about malware covertly capturing images and video. We show a vulnerability in the iSight webcam that affects a particular range of Apple computers ... that can be exploited to turn on the camera and capture images and video without the indicator illuminating.

Newer Macs are not susceptible to this firmware hack, but this does give you food for thought. While no one has published a hack for newer Mac FaceTime HD cameras, one never knows what basement hackers are working on presently. Gamet points out that, "Giving anyone unsupervised access to your Mac ... is a good way to end up with apps you don't want and settings changes that reduce your overall security."

If you want to dredge up one of your older Macs, you can add trying out the iSight firmware hack to our list of Twelve things to do with an old Apple computer. If your current Mac in use is from 2008 and before, may we recommend decorative tape from Scotch Products?

In this article: firmware, hack, iSight camera, Johns Hopkins University, Mac, webcam
All products recommended by Engadget are selected by our editorial team, independent of our parent company. Some of our stories include affiliate links. If you buy something through one of these links, we may earn an affiliate commission.