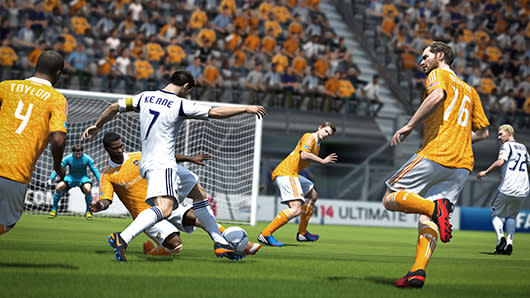 That money grandma tucked into your card this year? GameStop wants it, and is holding a post-Christmas winter sale to get it. The retailer's deals end on December 29 and take $10 off the following Xbox One and PS4 games: Call of Duty: Ghosts, FIFA 14, Battlefield 4, Need For Speed: Rivals, Madden 25 and NBA Live 14. Each game is $10 cheaper on their respective current-gen platforms as well. Additionally, Assassins Creed 4: Black Flag and Battlefield 4 are discounted to $39.99 on their other respective platforms (PS3, Xbox 360, Wii U and PC), though the former isn't on sale for PS4 or Xbox One.

The holidays do not need to end for gamers, and if a GameStop gift card was stuffed in your stocking, then

offering discounts on some of this season's hottest video games, consoles and accessories. Do not get too

comfy in front of the fire, as these deals will only last for a limited time.

Next-Generation game discounts include $10 off the PS4 and Xbox One versions of:

Additional game discounts for other consoles:

GameStop will also have the best gaming accessories available on sale:

Some great deals on Pre-owned consoles include:

The deals do not stop here. For a full list of discounted items including pre-owned games, consoles and

Still looking for a Sony PlayStation® 4 or a Microsoft Xbox One? GameStop stores will have a limited number

of consoles available for sale. For availability please contact your local store or visit www.GameStop.com.
In this article: assassins-creed-4-black-flag, Battlefield-4, call-of-duty-ghosts, fifa-14, gran-turismo-6, grand-theft-auto-5, kingdom-hearts-15-hd-remix, madden-nfl-25, microsoft, nba-2k14, nba-live-14, need-for-speed-rivals, nintendo, playstation, playstation-vita, ps3, ps4, tearaway, vita, wii-u, xbox, xbox-one
All products recommended by Engadget are selected by our editorial team, independent of our parent company. Some of our stories include affiliate links. If you buy something through one of these links, we may earn an affiliate commission.