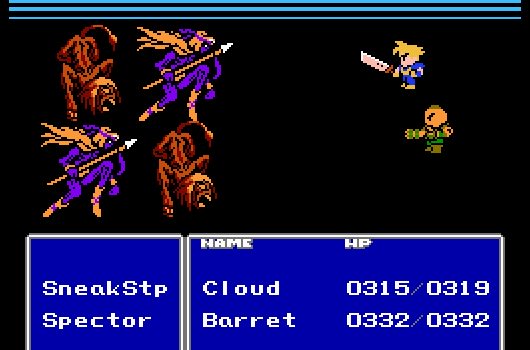 ROM hackers have overhauled an unofficial 8-bit version of Square Enix's Final Fantasy 7, turning what was once a barely-playable bootleg into a demake that's surprisingly faithful to its source material.

Released as an unlicensed Famicom cartridge in China, Shenzhen Nanjing's unsanctioned port of Final Fantasy 7 featured familiar characters and settings from Square Enix's PSOne classic, but removed many key story elements while upping the difficulty dramatically, rendering it an impressive but flawed curiosity.

After the subsequent release of a fan-made translation patch, a team led by modder Lugia2009 set out to address the game's many issues. The final product features redrawn graphics, improved music, and an actual ending, among many other bugfixes and improvements.

Speaking to Destructoid, Lugia2009 revealed that his next project is a translation patch for Shenzhen Nanjing's unlicensed NES port of Pokemon Yellow.
Via: Destructoid
Source: Romhacking.net
In this article: famicom, final-fantasy-7, nes, pc, retro, square-enix, unlicensed
All products recommended by Engadget are selected by our editorial team, independent of our parent company. Some of our stories include affiliate links. If you buy something through one of these links, we may earn an affiliate commission.