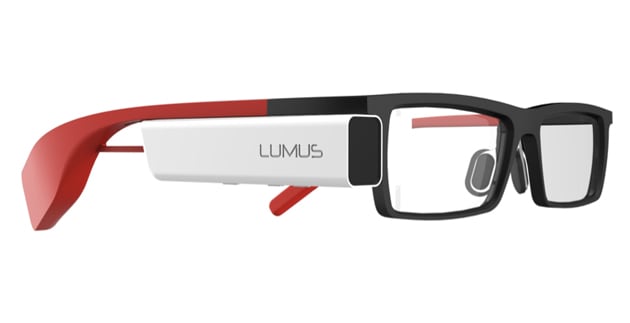 Lumus is a heads up display (HUD) manufacturer better known for its military-grade products, some of which have been deployed in US Air Force F-16 and A-10 helmets. Its latest effort, the DK-40 dev kit, is an attempt to steer its tech toward the consumer market. And yes, it looks a lot like Google Glass. But instead of projecting notifications on the outskirts of your peripheral vision, the entire right lens of Lumus' Android-powered eyewear is a 640 x 480 see-through display. The DK-40 also includes a motion sensor and 5-megapixel camera necessary for a true AR experience. Though its sleek design is more socially acceptable than its fighter pilot headgear, Lumus doesn't intend to mass-produce anything just yet. The glasses are still deep in development stages, harboring only 1-2 hours worth of battery life. Instead, the company simply wants to promote the adoption of its lens technology. The entire monocular kit and SDK will debut at CES 2014, but won't ship to OEMs and "select developers" until the end of Q1 2014.

Source: SlashGear
In this article: android, AR, dk-40, dk40, eyewear, glasses, google, google glass, lumus, wearables
All products recommended by Engadget are selected by our editorial team, independent of our parent company. Some of our stories include affiliate links. If you buy something through one of these links, we may earn an affiliate commission.