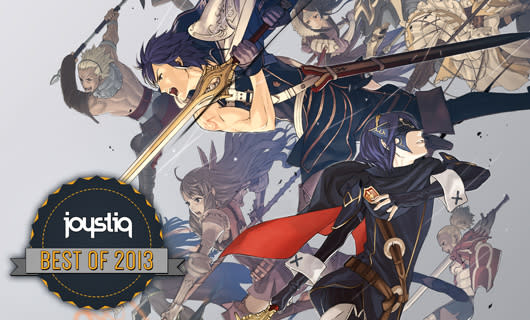 The last time I fell so deeply in love with a strategy-RPG was with Shining Force on the Sega Genesis, so Fire Emblem: Awakening was one of this year's most pleasant surprises. It rekindled an addiction I'd long thought dead, and its deep mechanics kept me hooked through several playthroughs.

Previously, the Fire Emblem games scared me away with their brutal permadeath mechanics; earlier series entries kill off major characters for good if they fall in battle, often leaving players with a gaping hole in their ranks if an enemy should land a lucky critical strike. Awakening allays these fears with its new "Casual" mode, which mercifully allows characters to retreat after being defeated, instead of croaking on the spot.

Casual mode is a boon for fretful players (and obsessed micro-managers), and it allows both casual fans and hardcore veterans to customize their experience to a degree never before seen in the series. For instance, if you want to sample Fire Emblem's traditional high-stakes gameplay but don't want to risk losing several units during each battle, you may want to set the game's difficulty to Easy while opting out of Casual mode. During my second playthrough, I chose to play on "Hard Casual," a seemingly oxymoronic combination that provides a satisfying level of difficulty without the stomach-churning risk of permanent character loss. It proved to be an ideal solution for me, emphasizing everything I like about the genre while downplaying the elements I didn't especially enjoy.

Awakening matches its player-friendly approach to difficulty with refined combat mechanics, equipping players with a wide range of strategic options while making the impact and tradeoffs of individual skirmishes easy enough to determine at a glance. Battles are frequently accented with unexpected twists, too, which will keep you on your toes even when it seems like victory is assured.

Fire Emblem: Awakening's greatest strength lies in its uncommonly skilled localization. The game boasts a complex character relationship system that allows your party members to form bonds with one another between battles. Pair up two compatible units on the battlefield and you'll be rewarded with a blossoming friendship, romance, or even marriage. Later on in the game, your husband-and-wife couples might even produce offspring, which you can then add to your playable ranks. Delightful. As a result, there is a ton of dialogue in Awakening, and all of it is worthwhile. It's a credit to Awakening's writing staff that its dozens of characters all manage to forge their own unique personalities, and you'll find many favorites as they reveal more about themselves during the campaign.

Months after my last playthrough, the bulk of the game's cast remains fresh in my mind. There's the overpowered and exceedingly loyal Frederick, the always-forgotten Kellam, the lovably tomboyish Sully, the unhinged pyromaniac Henry, the farmhand-turned-unstoppable killing machine Donnel, the ...

Ahem. It suffices to say that I really enjoyed Fire Emblem: Awakening. In a banner year for 3DS releases, it emerged as one of the best of the best, and even if you don't normally enjoy strategy-RPGs, you'll find a lot to like in this one.

Seriously, though, take the time to level up Donnel. That guy's ridiculous.

Joystiq is highlighting its 10 favorite games of 2013 throughout the week. Keep reading for more top selections and every writer's personal picks in Best of the Rest roundups. The list so far:
In this article: 3ds, best-of-2013, fire-emblem-awakening, goty-2013, intelligent-systems, joystiq-best-of-2013, nintendo
All products recommended by Engadget are selected by our editorial team, independent of our parent company. Some of our stories include affiliate links. If you buy something through one of these links, we may earn an affiliate commission.