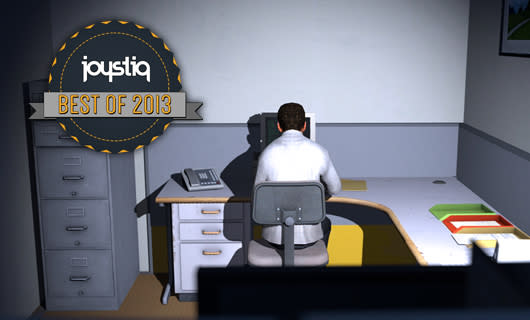 If you could bring yourself to describe and spoil them, it would be much easier to write about the marvelous moments that make The Stanley Parable such a special piece of entertainment. These moments, some of which commandeer the game and some of which seem insignificant as they pass you by, shape the outcome of Stanley's story.

Whether you decide to go along with the narrator's dialog, following his every command to the letter, or completely ignore him and forge your own path, or just stand still, The Stanley Parable has something to say about your decision.

Sometimes the tiniest choice, seemingly innocuous in size and scope, results in a cataclysmic conclusion. Sometimes there's a joke that runs on too long – and the game tells you as much and then insults you for allowing it to continue.

This isn't the first game to have been created as a commentary on design. Far Cry 3's Blood Dragon spinoff, for example, pokes and prods at the way games are made. The Stanley Parable does this as well, but it also serves as a commentary on the way in which we play games. The Stanley Parable's narrator will scoff at your decisions, poke fun at your expectations and even restart your game if he deems it necessary.

The Stanley Parable is a short adventure, but its tendency to boggle the mind and charm all the same makes it one that you cannot pass up. Cherish those surprises with Stanley.

Joystiq is highlighting its 10 favorite games of 2013 throughout the week. Keep reading for more top selections and every writer's personal picks in Best of the Rest roundups. The list so far:
In this article: best-of-2013, Davey-Wreden, Galactic-Cafe, goty-2013, Joystiq-Best-of-2013, mac, pc, the-stanley-parable
All products recommended by Engadget are selected by our editorial team, independent of our parent company. Some of our stories include affiliate links. If you buy something through one of these links, we may earn an affiliate commission.