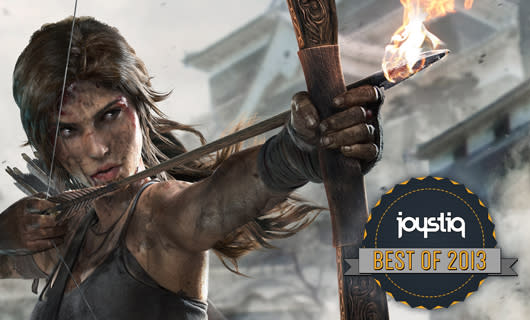 Lara Croft has now spent approximately half her life with Crystal Dynamics, but it was only In 2013 that their relationship truly bloomed. In the past, Tomb Raider games excelled through a zesty blend of platforming, exploration, and silly gunplay. As adventures to play and romp through, they were riveting, but ask what they were about beyond physical features and it'd be hard to come up with an answer. Tomb Raider was the series about the lady in the short shorts jumping through Incan booby traps, not tales about people changing and growing. They weren't human.

In rebooting the series, Crystal Dynamics finally broke totally free of the mold defining what a Tomb Raider game could be. They made it a good story.

How strange then that it took going back to Lara's past to make a legitimate tale. Tomb Raider, the sparely titled game that finally came out in 2013 after many a delay, is a prequel that works because it makes story the centerpiece. That story gains weight because it's integrated into every facet of the game, not just a collection of cutscenes.

Some things were lost in the process. It's profoundly disappointing to play a game called Tomb Raider and find that there are fewer than a dozen puzzles, and each one of them is restricted to just a tiny little room. It's more disappointing still that those missing puzzles were replaced by random hordes of faceless berserker enemies with no self-preservation instinct. Lara's journey through and escape from Yamatai is so wonderfully physical and honest that it makes up for those missing pieces. Lara herself is a captivating person on her own in this game. Her motivations are spelled out honestly in the game's opening moments, shown through a series of subtle scenes that demonstrate her conflicting emotions. She knows that she's intellectually prepared to inherit her family's legacy as an adventurer, but still afraid of what's waiting for her out in the field. That struggle is born out not just in dialogue as she clambers over the cliffs and through the forests of Yamatai, and even in her increasingly frequent firefights with the island's trapped thief cultists.

That Yamatai itself feels like a reflection of Lara's passage into maturity is Tomb Raider's greatest success. Narrative constraints lead you by the nose from one small hub area to the next on the island, each one more densely packed with things to pick up and explore then the last. Heading from that first crumbling village to the ship graveyard near the end has the same feeling of grudging growth everyone goes through in their early 20s. It makes Lara's final confrontation with the supernatural – the unknown in life – and her excitement for the next adventure in the game's epilogue deeply rewarding.

Tomb Raider could have been a better game. Crystal Dynamics needs to have more trust in its players to figure out what they need to do. Fewer visual hints, fewer comments from Lara telling you what to do, far more cerebral challenges and far less killing. No game is perfect, though, and Tomb Raider's triumph as a character study isn't dulled by its mechanical shortcomings. May Lara and Crystal Dynamics' relationship continue to blossom.

Joystiq is highlighting its 10 favorite games of 2013 throughout the week. Keep reading for more top selections and every writer's personal picks in Best of the Rest roundups. The list so far:
In this article: best-of-2013, crystal-dynamics, goty-2013, joystiq-best-of-2013, microsoft, pc, playstation, ps3, ps4, tomb-raider-2011, tomb-raider-2012, tomb-raider-2013, xbox, xbox-one
All products recommended by Engadget are selected by our editorial team, independent of our parent company. Some of our stories include affiliate links. If you buy something through one of these links, we may earn an affiliate commission.