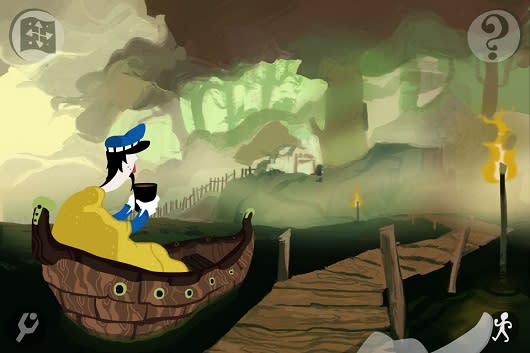 2014 may be young but there are already some new games to dig into, including the brightly animated mystery that is Detective Grimoire. The classic-looking point-and-clicker tasks you with uncovering the truth behind a murder apparently perpetrated by a mythical marshland creature - called Boggy, of course, of Boggy's Bog, no less.

Detective Grimoire is the brainchild of British brothers Tom and Adam Vian, who comprise SFB Games - the SFB stands for Super Flash Bros. The exceptionally-eyebrowed Grimoire character made his debut back in 2007 in a Flash game, but with the aid of nearly $30,000 from a 2012 Kickstarter campaign, SFB brought him to newly animated and voiced life in this year's release. That includes the familiar vocals of Arin "Egoraptor" Hanson of the Awesome parody series, and Skullgirls announcer Josh "Tomamoto" Tomar among others.

You can check out Detective Grimoire on iOS or Android for $4, or cross-platform across Windows PC, Mac, Linux, and Android for $7.
In this article: android, armor-games, detective-grimoire, ios, ipad, iphone, linux, mac, mobile, pc, release-date, sfb-games
All products recommended by Engadget are selected by our editorial team, independent of our parent company. Some of our stories include affiliate links. If you buy something through one of these links, we may earn an affiliate commission.