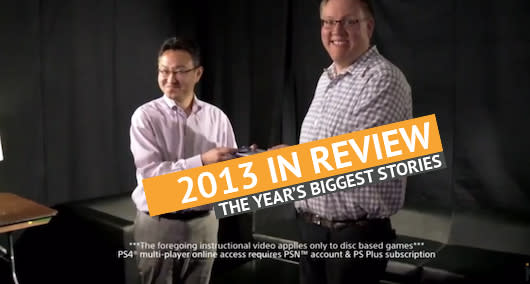 A lot happened in 2013, but since we couldn't get the budget for an eight-part documentary directed by Ken Burns and narrated by Morgan Freeman, we had to pick some highlights. Our key focus ended up being the console launches, Steam Machines, along with the trials and tribulations of Electronic Arts.

Not only did the aforementioned elements have a long narrative throughout all of 2013, but they'll also have a significant impact during our current trip around the sun. We tried to focus on the big subjects that had an impact through the year, but more than enough happened that couldn't fit in five minutes. Let us know if you recognized any themes. And, no, it being "the year of Luigi" is not a theme. Sorry.

These were the top news elements of the years, but if you're looking for game chatter, check out our Top Games of 2013 and Best of the Rest features. We also did a whole podcast on 'em.
In this article: 2013-in-review, microsoft, pc, playstation, ps4, xbox-one, year-in-review
All products recommended by Engadget are selected by our editorial team, independent of our parent company. Some of our stories include affiliate links. If you buy something through one of these links, we may earn an affiliate commission.