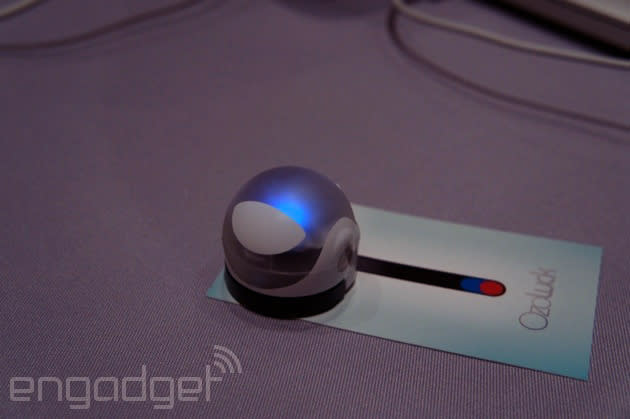 All right, we've officially figured this one out. It's definitely the sort of thing it helps to see in-person, which is why we weren't able to really do it much service the first time out. So here's the quick explainer: Ozobot is a tiny robot (roughly the size of a twist-off bottle top) that is capable of recognizing codes and sensors both on a mobile device and a more analog surface. The company has developed a handful of games that create patterns, which serve as paths for the 'bot. Ozobot also has built-in lights, which flash in different colors, to let you know what it's up to. The company pulled out a couple of add-ons and stuck them on an iPad, extending the robot's course -- a race track kit runs around $120 and ships with two robots, so you can have the little guys compete.

Ozobot can theoretically work with non-digital board games, and the company tells us it's looking to build partnerships with folks like Parker Bros. It's also looking for third-party app developers to create more games for its system. From what we saw, the selection is pretty limited at the moment, but there are certainly some cool potential applications for a little tablet-friendly robot like that, should the right developers come on board. In the meantime, the company is set to launch later this year, with the diminutive 'bot priced at around $59. In this article: ces, ces2014, ozobot, robot, toys
All products recommended by Engadget are selected by our editorial team, independent of our parent company. Some of our stories include affiliate links. If you buy something through one of these links, we may earn an affiliate commission.