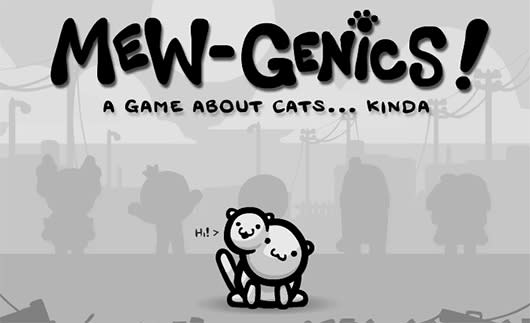 Mew-Genics is an upcoming Team Meat production focused on cats: Cat breeding, cat sex, the horrors of cat genetic manipulation and, as the below .gif demonstrates, the adorably icky parts of cat birth.

Though the cloud of afterbirth is a nice touch, the important thing to notice here is the kitten unceremoniously plopped onto the ground. He bears his mother's spots, but since his father is nearly pure white, the lil' fella's spots are less prevalent than they were in the prior generation. As Team Meat explains, this (and every other trait the kitten inherits) may change as the cat ages.

Of course, Mew-Genics also allows players to influence the way their cats change over time. With a few subtle environmental tweaks, a kitten destined to grow into the feline equivalent of Mother Teresa might instead pledge allegiance to the thug life.

Mew-Genics is currently slated for release at some point during 2014.
In this article: cat, cats, mew-genics, team-meat
All products recommended by Engadget are selected by our editorial team, independent of our parent company. Some of our stories include affiliate links. If you buy something through one of these links, we may earn an affiliate commission.