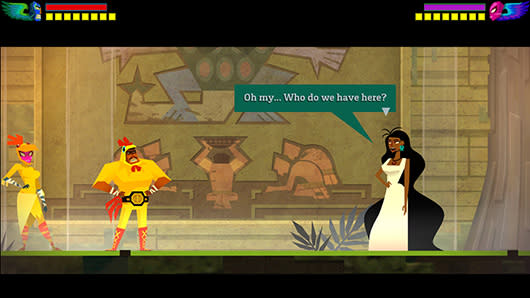 You shouldn't need additional reasons to pick up Guacamelee (a game we awarded 4 of 5 stars) but just in case you remain on the fence, developer Drinkbox Studios has announced the content-packed "Guacamelee Bundle Fantastico."

Headlining the Bundle Fantastico is the game itself, which is cross-play compatible with both the PlayStation 3 and the Vita handheld. Additionally, the collection includes both the Costume Pack and El Diablo's Domain DLC releases. The former offers new outfits for the game's protagonist which alter how the game plays, from granting you infinite stamina to reducing the power of certain attacks. El Diablo's Domain adds 17 new trials to Guacamelee designed to test the skills of those who have mastered the game's Metroid-meets-lucha libre controls.

Rounding out the Bundle Fantastico are three Guacamelee themes for your PS3, 10 Guacamelee avatars, and a remastered soundtrack including 30 mariachi-inspired tracks from the game as well as four additional remixes.

Drinkbox claims the Guacamelee Bundle Fantastico should appear on the Sony Entertainment Network later today. Once available, the bundle will feature a $20 price tag - making it $5 more expensive than purchasing Guacamelee by itself.
In this article: bundle, dlc, drinkbox-studios, guacamelee, guacamelee-bundle-fantastico, playstation, playstation-vita, ps3, vita
All products recommended by Engadget are selected by our editorial team, independent of our parent company. Some of our stories include affiliate links. If you buy something through one of these links, we may earn an affiliate commission.