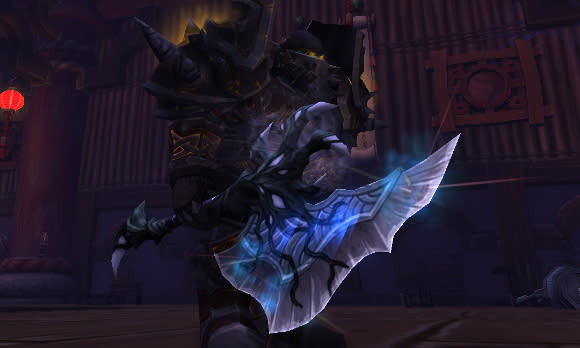 I know I promised y'all a Cataclysm roundup, but I'm burned out after that huge Wrath of the Lich King post and I need some time to recharge, so I'm taking a week and writing something more personal. This week, I want to talk about how the lore can look entirely different depending on what faction you're playing, what characters you like or dislike - how the story is effectively a prism that bends and scatters based on your perspective.

World of Warcraft is the aggregate of a lot of stories. It isn't one story. This is because it's effectively the story of your character, whoever she or he happens to be, and the story of all the other characters playing the game - and it takes place in a world made and shaped by a long history, going back twenty years now to the first Warcraft: Orcs vs. Humans RTS. And one of the results of all that is, you can have opposing viewpoints be entirely correct from their own perspective. It's sort of the old line Ben Kenobi tossed at Luke - what we believe about the story can be true, from a certain point of view.

It's one of the reasons I think all players should have at least one alt on the faction opposite their main, to see and experience the story from the other side of the fence. I'm going to use my own personal experience here for a second - this expansion alone, I've leveled a tauren, draenei, worgen and orc warrior to level 90. What did I experience? Amazingly, even between the orc and the tauren, I saw radically different things, not just because I did different zones (my tauren did Krasarang, my orc skipped it, for example) but because of who they were. From where you stand

The lore of the setting often says some things that are ambiguous while also being fact. One example that comes to mind is the legacy of the Old Horde and the invasion of Azeroth. To my tauren, it's mostly just history of events that he never experienced. To my orc, it's the mistakes of his parents, crimes he's tired of having to hear about, things he never did or even saw that he still has to deal with. To my draenei, it's recent history, events he lived through that have scarred him and haunt him still. And to my worgen, it's what caused the closing off of Gilneas in the first place, and the Horde invasion that robbed him of his home has him convinced that Genn was right - they shouldn't have spared any of the orcs, shouldn't have housed them or fed them in the camps. To my worgen, the camps seem like misplaced mercy - to my orc, a haunting legacy of shame and defeat and mistreatment that enrages him every time he thinks about that time, of growing up penned up like cattle, of sneering human guards who treated him like an animal.

These are two radically different perspectives. But for each character, they're true. When playing an orc, I imagined what it would be like to grow up in the Internment Camps, because remember, those were a going concern up until just before the Third War - Thrall and Orgrim Doomhammer liberated those camps during the events of Lord of the Clans. Almost all players who play an orc are playing one born during that period of captivity, and so, in one way or another the story of that character (if you actually care about that, which, since you're reading KYL I'm assuming you do) is the story of how she deals with that legacy, and moreover, with how it plays out around them.

Because Mists of Pandaria did an amazing job of showing how orcish culture has never gotten over its roots - how in attempting to give the orcs what they wanted and needed in a warchief, Thrall showed his own ignorance of his people. Thrall grew up raised apart from the Camps - he was mistreated, even tortured, in order to make a slave gladiator out of him. He did not grow up speaking orcish among other orcs, the stories he heard were second or even third hand until he finally escaped and found Grom Hellscream, who pointed him towards the Frostwolves and his destiny. Life on Draenor was, and is, an abstraction to Thrall - the savagery of that planet before the rise of the warlock Gul'dan, the hunter/warrior culture that contended with ogres for dominance and survival, how it all changed - these aren't events he lived through. The rise of the Old Horde was a story to him. But Garrosh Hellscream lived it. And the people Thrall handed over to Garrosh when he made him warchief either lived it, or lived in its aftermath - to them, the Horde was originally a story their parents' generation told them as they lay in bondage.

From the perspective of an orc whose people have been through that, it's not particularly surprising that a sizeable portion of the orcish people, especially ones from clans like the Blackrock and Dragonmaw who never accepted Thrall as warchief, would seek a return to the time when orcs were a force everyone feared, a powerful, ruthless military that took what it needed. Being led out into the desert to scratch at parched ground for sustenance for the crimes of one's parents isn't a very compelling thing to have to live through, especially when you already had to grow up inside barbed wire, had to endure being treated like an animal by human guards for those same crimes. How much penance is enough? From the perspective of an orc, it makes perfect sense to fort up and protect your own.

All of that is true from that certain point of view. My orc warrior was very conflicted about ultimately rebelling against Garrosh Hellscream, because he generally liked the more aggressive Horde that he found himself in following Cataclysm - however, unlike Garrosh, my orc also had friends and allies from the other races in the Horde, and so, when Garrosh began turning against them his orcish sense of loyalty to the group ultimately led him away from his warchief. Garrosh's Horde was purely orcish, but my orc had grown through his experiences over the years - he had come to view trolls, tauren, even some blood elves and forsaken as his allies, his peers, even sometimes his friends, and his experiences growing up with humans looking down on him for being an orc meant he couldn't look down on goblins or trolls or blood elves or forsaken for not being orcs. The lore of the game - effectively, its history - informed his decision as I played through it.

Yet for my draenei, all of the above, which is completely real for said orc is complete sophistic BS. To him the crimes of the Old Horde aren't some distant, unknowable stories told to a small orc child growing up amidst barbed wire - all he has to do is go back to Outland and stand on the Path of Glory and he can see the bones of his people rendered into a road for the orcish war machine to march over while on their way to invade and despoil an entirely new world. To him, the fact that the warriors of the Old Horde got to have children is an astonishing act of mercy compared to what his people suffered in their defeat - namely, the near-total annihilation of the entire race. And it wasn't the draenei who started that war, either, whereas the orcs who lost the Second War were the invaders, the aggressors, who marched into Azeroth and burned towns, slaughtered whole farm communities, destroyed Stormwind and brought war and death to the very walls of Lordaerson before they were defeated. What seems like racism and mistreatment to my orc (because it was) seems like an act of almost unfathomable mercy to my draenei.

After all, his people didn't even get to live penned up in camps by the orcs. His people were turned into pavement, their bones crunching under orc feet that marched towards their next war. The people of Azeroth escaped a grim fate at the hands of orcish victors, he thinks. He was eager to go to Orgrimmar and lay siege to it, eager to topple Hellscream, because in the True Horde of Garrosh's plans he saw the sacking of Telmor, the destruction of Shattrath, the seizing of Karabor again, and he'd do anything to prevent the Horde from rising to power over another world. To him, there's no difference between the Old Horde and the New - why should he see that? How could he, really?

The lore of Warcraft is a huge, sprawling thing, emerging from twenty years of games, short stories, novels and comics (and soon to include a movie) and its not surprising that seeing it from different sides gives you a different perspective on it. It's something I really recommend.

Next week, we get back into the summations with Cataclysm.

While you don't need to have played the previous Warcraft games to enjoy World of Warcraft, a little history goes a long way toward making the game a lot more fun. Dig into even more of the lore and history behind the World of Warcraft in WoW Insider's Guide to Warcraft Lore.
In this article: featured, guide, guide-to-lore, lore, lore-guide, role-play, role-playing-guide, rp-guide, world-of-warcraft-lore, wow-guide, wow-lore, wow-role-playing, wow-role-playing-guide, wow-rp, wow-rp-guide, wow-rping
All products recommended by Engadget are selected by our editorial team, independent of our parent company. Some of our stories include affiliate links. If you buy something through one of these links, we may earn an affiliate commission.