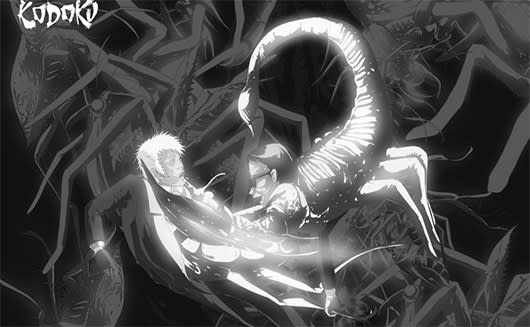 Developer Carnivore Studio describes Kodoku as "a self-published horror and exploration game for Playstation Vita and Playstation 4." That information is useful from a pragmatic standpoint, but it doesn't prepare you for what you'll see in the above teaser.

How exactly pigs with human heads and murderous, Kafka-esque bug people figure into the game is still unknown, but Pocket Gamer states that Kodoku drops players onto a mysterious island with the goal of finding a rare book. While your character will eventually learn to use magic spells and craft useful items, the key to staying alive is stealth. When the supernatural denizens of the island come for your head, your best course of action will generally be to hide or avoid combat. Otherwise you may be decapitated by a leering, anthropomorphized scorpion.

No release date is currently available for Kodoku, though Carnivore Studio hopes to release the game toward the beginning of 2015.
In this article: carnivore-studio, horror, indie, kodoku, playstation, playstation-vita, ps4, vita
All products recommended by Engadget are selected by our editorial team, independent of our parent company. Some of our stories include affiliate links. If you buy something through one of these links, we may earn an affiliate commission.