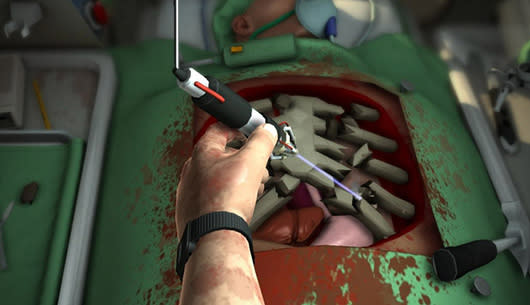 With Surgeon Simulator 2013, Bossa Studios managed to make horrific medical malpractice entertaining. If a newly-released teaser is any indication, the developer now hopes to do the same for ill-advised dental surgery.

Though actual gameplay footage is scant, the above clip clearly shows a sedated patient being repeatedly bludgeoned by what appears to be a heart rate monitor. The developer pictured in the video then shoos the camera away, sparing viewers from what's almost certainly an even more horrific fate for our poor patient.

It's unknown what exactly this video is teasing, though the final moments of the clip feature the Surgeon Simulator logo, then claim that whatever we're watching will be "coming soon to an iPad near you." This suggests the above periodontal nightmare is coming to the iOS incarnation of Surgeon Simulator 2013, though when and in what capacity remains to be seen.
In this article: bossa-studios, dental-surgery, ios, ipad, mobile, surgeon-simulator-2013, tease
All products recommended by Engadget are selected by our editorial team, independent of our parent company. Some of our stories include affiliate links. If you buy something through one of these links, we may earn an affiliate commission.