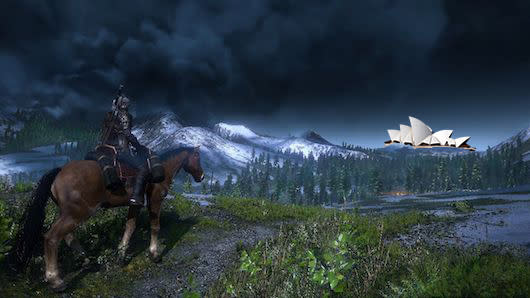 The Witcher 3: Wild Hunt is planning to stalk its most dangerous prey yet, with Namco Bandai serving as its Bear Grylls publisher in the poison-filled land of Australia. Oh, and New Zealand too.

Namco Bandai will also be handling Wild Hunt's excursion through Europe, but Warner Bros. will lead the expedition across North America. Wild Hunt is planned to conduct a simultaneous scavenge for wildlife across the PC, Xbox One and PlayStation 4 sometime in 2014. Though Wild Hunt will conclude the saga of Geralt of Rivia, CD Projekt Red will leave an opening for a possible return to the Witcher's world in the future.
Show full PR text
CD Projekt RED, the developer and publisher behind the highly anticipated fantasy RPG The Witcher 3: Wild Hunt, is excited to announce that NAMCO BANDAI Games Australia and New Zealand, a leading video game publisher, developer and distributor, will distribute the third part of The Witcher saga and join the studio in bringing the series to the key markets of Australia and New Zealand. Namco Bandai will exclusively distribute and promote the game in these territories.

"We're really excited to continue to develop our relationship with NAMCO BANDAI Games and, as a result, introduce The Witcher 3: Wild Hunt to even more gamers across the globe. Thanks to our shared passion for games and our partner's understanding of what core values constitute The Witcher series, I'm confident we can make the launch of The Witcher 3 something really special," said Adam Badowski, Head of Studio, CD Projekt RED.

"CD Projekt RED is a world class developer that cares passionately about its games and its fans. We are therefore delighted and proud to again be their chosen partner in Australia and New Zealand and we are very excited to add the eagerly awaited 'The Witcher 3: Wild Hunt' to our 2014 line-up." said Gerard Noonan, SVP, NAMCO BANDAI Games Asia Pacific. "The Witcher series is one of the industries most revered video game franchises and with the power of the new generation of consoles we expect CD Projekt RED will take the series to even greater heights".

The first installment in the Witcher series was released in 2007 for the PC. The second installment hit the PC market in 2011 and was released for the Xbox 360 games and entertainment system from Microsoft a year later. The two games received over 200 awards. In February 2013, CD Projekt RED announced The Witcher 3: Wild Hunt, which is scheduled for a 2014 release and has garnered over 88 awards so far. The game will be released simultaneously for the PC and next-generation consoles: PlayStation®4 and Xbox One.

About CD Projekt RED
Development studio established in 2002 and based in Warsaw and Cracow, Poland. Creators of The Witcher and The Witcher 2: Assassins of Kings. Both RPGs were praised by critics and fans, gathering over 200 awards and selling over 6 million copies to date. Originally a PC developer, CD Projekt RED has released The Witcher on Mac and The Witcher 2 both on the Xbox 360® games and entertainment system from Microsoft and Mac. The studio is now working on The Witcher 3: Wild Hunt, the grand finale of the Geralt of Rivia saga. The game will be released in 2014 on Xbox One, Playstation®4 and PC. The developer is also working on Cyberpunk 2077 in collaboration with Mike Pondsmith, the original designer of the pen-and-paper Cyberpunk® futuristic RPG system in which the upcoming game is set. CD Projekt RED developers' mission is to take the passion they have for games and harness it to make the best RPGs in the world. Along with GOG.COM, the Internet's leading destination for the best DRM-Free games in history on PC and Mac, CD Projekt RED is part of the Warsaw Stock Exchange listed (ISIN: PLOPTTC00011) CD Projekt Group.

About NAMCO BANDAI Games Europe S.A.S.
NAMCO BANDAI Games Europe S.A.S., part of NAMCO BANDAI Holdings Inc., is a leading global publisher and developer of interactive content for platforms including all major video game consoles and PC, with marketing and sales operations in 50 countries across Europe, the Middle East, Africa and Australasia. The company is known for creating and publishing many of the industry's top video game franchises, including PAC-MAN™, Tekken™, SOULCALIBUR™, NARUTO™, NARUTO SHIPPUDEN™, Dragon Ball®, GALAGA™, RIDGE RACER™ and ACE COMBAT™. More information about the company and its products can be found at http://www.namcobandaigames.eu or http://www.facebook.com/namcobandaigames.europe
In this article: australia, CD-Projekt, cd-projekt-red, microsoft, namco-bandai, new-zealand, pc, playstation, ps4, the-witcher-3, witcher, xbox-one
All products recommended by Engadget are selected by our editorial team, independent of our parent company. Some of our stories include affiliate links. If you buy something through one of these links, we may earn an affiliate commission.