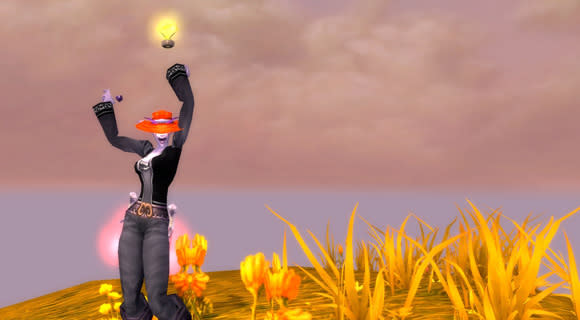 My fellow rogues, it's time for an eleganza extravaganza.

For the past couple of months, you've joined me on a long, winding stroll through the state of roguedom today. We've talked about the burning questions on our minds as rogue players; how stealthy (or not) our stealth is; and what makes us (or used to make us) feel unique as a class. We've talked about what we're thankful for, as well as what we're less thankful for, as the Warlords beta likely draws near.

And finally, last week, we tagged along as three fictional rogues hung out in a fictional bar, got fictionally drunk and caterwauled over the many nonfictional (and sometimes contradicting) complaints players have about how their class works.

So. Where does all of this chatting leave us? Are we any closer to agreement on these issues?

I'm not so sure. In fact, I suspect that, while we've generated a lot of great conversation, the main thing we've done here is highlight just how tremendously varied our opinions are when it comes to the specific aspects of rogue gameplay we players would like to see altered.

But I think we're closer to getting at one of the major seeds of our communal discontent. Here's what I suspect that seed is.

@silvertongue0 @Ghostcrawler "Overhaul", no. We want to better distinguish their different specs. That's not an "overhaul" at all, though.

I think part of the reason for this huge diversity of views is that, while many of us may feel unsatisfied with our rogues, we don't know exactly why we're unsatisfied. That makes us feel restless, and leaves us hungry for a definitive answer. So as we play WoW on our rogues (and compare them to other classes and games we play or read about), we start to pay extra attention to the little things that bug us. And when we discover one, we latch onto it with steadfast fervency: "This is our big problem," we think. "This is what we need to fix, and then the class will be fun for us again, and more people will want to play a rogue."

Combo points need to stack on the rogue. Then our class will be fun again, and more people will want to play a rogue.

Less of our damage needs to come from autoattacks. Then our class will be fun again, and more people will want to play a rogue.

The three specs need to be more different. Then our class will be fun again, and more people will want to play a rogue.

I don't deny that all of these ideas (and the many others that have been offered) have allure, and that some may well be good for the class and the game as a whole. But as I said last week, I don't think any single change to our class -- particularly not the mechanics of how our class works -- will turn our stabby frowns upside down.

I think the real issue many of us have -- particularly those of us who don't PvP, since outside of PvP we tend to use a far smaller portion of our spellbook -- is that playing a rogue doesn't feel like any of the various archetypes we hold in our minds for what a rogue should be, be it a ninja, a pirate, an assassin or something else.

In fact, I think a fair argument could be made that, a lot of the time, playing a rogue doesn't feel like much of anything. We hit some buttons, and then at some point a blob of pixels dies. There's a disconnect between our avatars and the sense of satisfaction we get from making them do the deadly bidding we transmit through our keyboards and mice.

In my opinion, what rogue players need most for their class isn't related to the ratio of damage dealt by our poisons/autoattacks to damage dealt by combo-point builders, or finishers, or even cooldowns. It's got relatively little to do with the buttons we press, how quickly we press them or the order in which they're pressed.

@evangel666777 We recognize that Rogue visuals aren't very cool/flashy. Somewhat expected, due to their stealthiness, but we can do better.

Raid fights are generally constructed such that they rarely make use of rogues' stealth or unique toolkit. That's understandable, and perhaps unavoidable. But a player can still "feel" like a rogue if they get more effective visual feedback when they use their damage-dealing abilities.

Most of our spells currently have effects so subtle that they often go all but unnoticed, especially in today's busy fight encounters. Toning down boss/ally spell effects and raid warnings that aren't relevant to the rogue is an essential step toward fixing this, but just as important is toning rogue visuals up, even if the rogue player is the only one who sees them.

I want to see more interesting animations brought to our iconic rogue abilities, particularly finishers and cooldowns. I want to see more body movement, more demonstrable weapon-swinging, and more overt auras immediately around my rogue. When my Envenom or Eviscerate crits, I want to experience it -- I want the air to warp and crackle, I want my weapon to triple in size, I want it to rend enemy flesh.

Making rogue visuals more engaging wouldn't just be a boon for us within raids and dungeons; it would also add much-needed flavor to what otherwise tends to feel like an uneventful series of abilities that we execute while leveling and questing.

Don't get me wrong: I empathize with those who complain that, for instance, rogue specs seem too similar (though I don't entirely agree). But I feel aesthetic similarities are the real culprit here, not mechanical similarities.

While the designers could (and likely will) give specs better spell differentiation -- for instance, they could make Slice and Dice only available to combat spec, tie Rupture to assassination and have Recuperate only boost the DPS of subtlety -- each spec would still have the "hit X button every Y seconds to maintain Z amount of damage" mechanic that lies at the core of virtually every DPS class. But if Hemorrhage looked and felt dramatically different than Sinister Strike? That would instantly drive home the sense that they're utterly different spells.

So would spec-specific alterations to our appearance. Not a change to our gear itself; I'm thinking more of an augmentation. Combat rogues could appear to stand differently, ever wary and ready to pounce, perhaps similar to a warrior's battle stance; an aura around assassination rogues could swirl with the poison that surely flows through their veins; subtlety rogues could have a darkness, a shadowy translucence about them, vaguely akin to a priest in Shadowform.

As much as we obsess over such minutiae, I know that, for me at least, such issues have little effect on my enjoyment of the game as a rogue player. Whenever our abilities change, I adapt; when our tools are altered, I adjust; when our optimal rotation shifts, I switch my rotation. None of that defines what it means to me to play a rogue.

Maybe that's why, for five years and counting, I still love the class. I just don't always love to play the class, because it doesn't feel engaging in some of the areas of the game I most enjoy.

Although WoW can never deliver on one of the most traditional rogue archetypes -- to kill instantly and never be seen -- I think it can deliver on the rogue aesthetic. That may be enough to get people to love playing their rogues a little more, and perhaps complain about them a little less.

Ah, who am I kidding. We'll complain regardless. But we'll still be happier, even if we don't want to admit it.

Sneak in every Wednesday or two for an early glance at rogues in the upcoming expansion, a look at the eight key things you should keep in mind when leveling your rogue -- and of course, the answer to why we'll always be the bad guys.
In this article: aesthetics, rogue-changes, rogue-fabulousness, rogue-visuals, wow-rogue, wow-rogues
All products recommended by Engadget are selected by our editorial team, independent of our parent company. Some of our stories include affiliate links. If you buy something through one of these links, we may earn an affiliate commission.