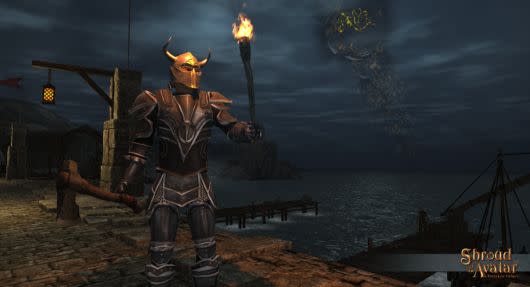 Last month, Portalarium's upcoming crowd-funded title, Shroud of the Avatar, entered the first phase of early access for backers of the game. Now the game is winding up for Release 2 of its early access program, and players will find that a number of new features have been added since Release 1 launched in December. Included among these features are the new municipality of Kingsport, which players can explore as they please, and a bevy of quality-of-life features like a "list inventory," improved character customization, and jumping.

But perhaps the most-anticipated feature of Release 2 is the introduction of crafting. The press release notes that this release includes only "the very first stages" of the game's crafting system, focusing on "refining and production for smithing, tailoring, and carpentry." Players will be able to find "more than 100 recipes" alongside chests full of crafting resources scattered throughout the game world. Other facets of the crafting system, such as resource gathering, item repair, and equipment enhancement, will be rolled out in subsequent releases. For now, though, Shroud of the Avatar backers can jump into New Britannia to check it all out for themselves while the rest of us watch and wait.

[Source: Portalarium press release]
In this article: avatar, crafting, crowdfunding, early-access, early-release, fantasy, kickstarter, lord-british, release-2, richard-garriott, shroud, shroud-of-the-avatar, SOTA
All products recommended by Engadget are selected by our editorial team, independent of our parent company. Some of our stories include affiliate links. If you buy something through one of these links, we may earn an affiliate commission.