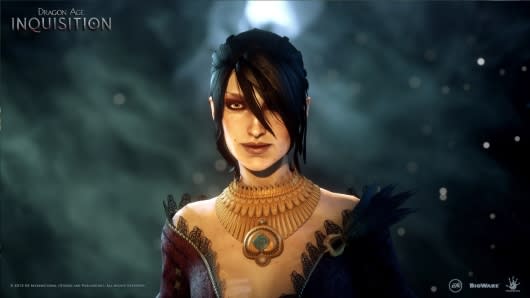 A BioWare fan recently asked David Gaider, lead writer for the Dragon Age series, if the company had considered making a game without romance subplots. Gaider responded that it's been a temptation, but he believes it's something BioWare not only does well, but is also something few other developers tackle.

"To me, the thing that BioWare does best is not story but characters," Gaider wrote on his Tumblr. "I think our characters are done to a level that few other games even attempt, with an element of agency that strikes a chord in our players ... and romances have been a natural outgrowth of that. Sure we could stop, but that would be turning our backs on something we do which almost no-one else does."

While Gaider's defense of romance in BioWare games is certainly passionate, he noted that it's not outside the realm of possibility that they could be left behind in the future. "Perhaps, if we made a new IP, we might decide it's best not to open that particular Pandora's Box (which, yes, romances have always been) and go with something else ... but that 'something else' better be something damned good, as there are a lot of people who enjoy that part of our games immensely and who might not be willing to buy into a new series which didn't have it."

"Some folks might be eager to write those fans off, but I'm not really sure that BioWare feels the same."
In this article: bioware, david-gaider, dragon-age, electronic-arts, love, romance, writing
All products recommended by Engadget are selected by our editorial team, independent of our parent company. Some of our stories include affiliate links. If you buy something through one of these links, we may earn an affiliate commission.